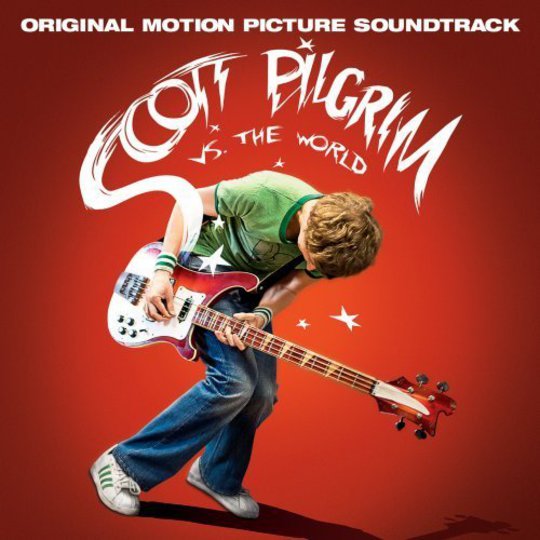 Two things are clear from the advertising campaign for forthcoming indie-loser-flick-cum-superhero-blockbuster Scott Pilgrim Vs The World. They are: a) much of the script is lifted line-for-line from the original comic book series (hooray!), and b) it's going to make Lots of Money.

Now, I don't want to get all True Art about it, but in this sort of scenario - where something you love is being reproduced via a more mainstream medium - we've become somewhat predisposed to expect (or even want) to dislike it. I do not want to give into this urge. I refuse to accept that there is any comparison to be had, because to even try to compete with literature's scope for character, complexity and sub-plot development, two hours is really Not Enough.

However, that begins to change when music is integral to the story. Aside from some of the graphic novel series' pivotal fight scenes taking place during characters' gigs, the world of Scott Pilgrim is steeped in references to pop culture. Scott Pilgrim and the Infinite Sadness is named after the Smashing Pumpkins double-album. A chapter in said installment, 'Frail and Bedazzled', takes its title from a song by the band. Not to mention that Pilgrim himself was named after a song by Canadian pop-punk group Plumtree.

It makes sense then, that Edgar Wright has been appointed as omnipotent project overseer for SPvsTW. Never one to shy away from intrusive film soundtracking, Wright, alongside series creator Bryan Lee O'Malley, has compiled a collection of fitting musical extremities, with music written and performed by Beck and Broken Social Scene but sung by actor Erik Knudson.

Beck brings Pilgrim's Sex Bob-omb to life with earthquake-like guitars and inordinate overdrive levels, while BSS tackle the rather woeful 'art-rock' of rival band Crash and the Boys. Metric, on the other hand, do the honours for pin-up punk rockers The Clash at Demonhead, offering up the formerly-unreleased-but-actually-not-rubbish 'Black Sheep', a euphoric, neon-punk disco number. One of this soundtrack's many unlikely successes is that every new track sounds exactly as I wanted it to: straightforward, energetic and youthful. However, Beck's own 'Ramona' (his sole vocal contribution to the album), is an unforeseeable triumph. A paean to love interest Ramona Flowers, my word count simply will not allow me to do this song justice. Suffice to say, as the chorus drifts from minor to major and back again in the three syllables of titular lady's name, you do not just love this song, you do not just love Beck, but you love Ramona Flowers, Scott Pilgrim fanboy or no.

With regards to Pilgrim's “terrible” (his words) high school rock band Sex Bob-omb, there are a couple of things to get cleared up. Other than 'Ramona', only Sex Bob-omb and Crash and the Boys' songs were specifically written for the film. These are shit songs. As in old-school shit. No cute stuff; not endearingly shit, just genuine, shit, angsty songs. It has to be this way. You could argue that Crash and the Boys' 'We Hate You Please Die' has a primitive charm - this can be put down entirely to the context. BUT. There is a deceptive skill to the shitness. Every one of these tracks is designed to obliterate your cinema's speakers. Guitars are abrasive, smothered in low-end and distorted almost beyond recognition. Crash and the Boys' 'I'm So Sad, So Very, Very Sad' is cymbal-counted in, earthquake guitars in place, and within four seconds it is Over. They are, in Wright's words, 'the kind of songs you would write as your first rock song', and that they are designed to be played once ties in perfectly with the comic book bands' punk ethos.

This use of striking musical statements is relentless. Edgar Wright's tendency to use sounds self-consciously suggests that these songs will not be background music, either. To demonstrate male bravado, we have The Rolling Stones' 'Under My Thumb'. For the pursuit of fading teenage fantasies, Marc Bolan & T. Rex's 'Teenage Dream'. Broken Social Scene's infinitely gorgeous 'Anthems for a Seventeen Year-Old Girl' strums the heartstrings of youths and olds alike.

And as the whirlwind puffs its last, there is time to reflect. Most music-orientated-films-that-aren't-really-musicals are disappointing in that the songs aren't as good as the film wants them to be. But as you may have gathered, in this case it's music that's supposed to be shit profoundly delivering on its promise - while also being as exhilarating as (sh)it was ever likely to be. With a soundtrack that captures the spirit of the comics with such fervency, conviction and discipline, Scott Pilgrim vs The World looks set to be a lot less dislikable than you might've hoped.