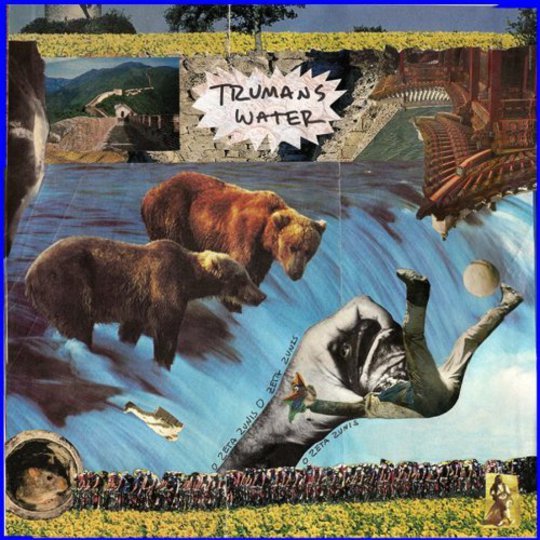 You hear a lot about ‘indie guilt’ these days, don’t you? Okay, maybe not a lot, but enough to have a vague idea of what it might entail. I for one would imagine an earnest young man preparing to shock a small audience of Wetherspoons drinkers or hunched messageboard posters by telling them that, actually, Rihanna’s songs are way more clever and life-affirming than those by Arcade Fire or Wolf Parade. Except that it’s something of a misnomer: no-one should really have to feel ‘guilt’ about this perfectly valid opinion. Tonight, my indie guilt flared up when I came to consider O Zeta Zunis, the 12th studio album by the Portland-based band Trumans Water, and how it compares to their earliest, most well-known work. Then I thought about exactly what I could have done with my life instead of venturing down a path leading me to have an idea of which are the most well known works by the band Trumans Water, while being unable to remember the name of the president of China or successfully fix a curtain rail. That’s what ‘indie guilt’ should be.

Still, though: Trumans Water (that’s how they spell their name, word to Lynne Truss) are now 19 years old as a band, and you really have to salute the sheer madness of this endurance. That best known work of theirs I mentioned came out in 1992 and ’93 (Of Thick Tum and Spasm Smash XXXOXOX Ox & Ass – ‘snot indie guilt that’ll stop me from discussing those in the alehouse, it’s a refusal to say anything that stupid out loud), and while they’ve amassed a pretty big discography since then, it’s kerfuffled on the fringes of any subgenre you wish to invoke. Trumans Water, certainly the Trumans Water of this album, aren’t really an indie-rock band or a math-rock band or postpunk or hardcore or noise. They still detune, then violate their guitars with an idiosyncrasy on the level of few bands save for Sonic Youth – and while SY remain a fairly palpable influence on the group, none of these 14 tracks concedes to throwing in a dabbler-friendly burst of melody. These tunes crawl and squall with a rickety chaos which might not actually be improvised, but if it isn’t is certainly in thrall to the concept (in the way that Beefheart’s Trout Mask Replica is, while in fact being terrifyingly well rehearsed).

O Zeta Zunis’ dopey, heavy-lidded basslines are infectious in an inexplicable way, but the album is probably at its best when the pace picks up. ‘Greased Water’, in the middle third, has some vicious throaty screaming from either Kirk or Kevin Brandstetter – they seem to share vocal duties in equal measure – and the same wrestling-an-eel approach to guitar soloing that defined Eighties hardcore bands like Void and Deep Wound. That Trumans Water were filed alongside Pavement back in the early Nineties, when Pavement were still an inscrutable mélange of sub-Fall thud and imperfect collage artwork, makes sense here too, especially on almost-catchy-for-a-second cuts like ‘Last Time’ and ‘Thew Eak Hen’ (again, their spelling). There are some pointless bouts of atonal clanging like ‘Blasphemous Cordialantlers Ride!’ (seriously, it’s a good thing I’m not invested in trying to sell these cats to a fresh new audience, because with titles like that I’d give up) but by their own odd standards this is a pretty snappy, direct album – Christ, Spasm Smash… was 77 minutes long and this is comfortably less than half that.

Hard to know who exactly comprises Trumans Water’s ‘audience’ at this point, not least because their last album prior to this (You Are In The Line Of Fire And They Are Shooting At You) was released seven years ago. If you are a crazed and longterm fan, this does the TW thing with a kind of aplomb. The world at large doesn’t need it, although it’d be swell if a few of those sockless kids who’ve formed Pavementy, willfully lo-fi bands in the last year or two skronked themselves up in this manner and stopped writing songs about going to the beach.