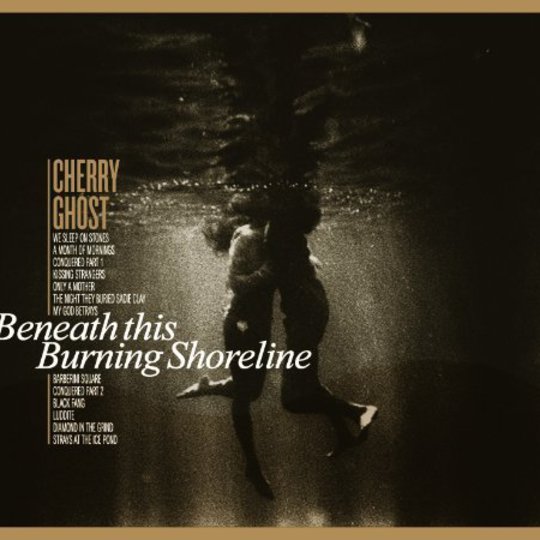 Beneath This Burning Shoreline, eh? So Cherry Ghost aren't in the best place, then. It wasn't exactly beaming rainbows on 2007's Thirst For Romance either, even if the hopeful sentiments and melodies encased in tracks like Ivor Novello-winner 'People Help The People' occasionally suggested otherwise. Three years on from such rousing exhortation and, oh, the world's quite a big bunch of shit, people aren't helping people, and rightist governments are in charge, duping nations with their own sub-communitarian delusions. But hey, the music ain't half improved a bit. Think back. Although the fringes gave us Person Pitch, Kala and Untrue, 2007's music landscape was still dominated by rock's dregs: wholehearted – occasionally talented – buskers (remember Stephen Fretwell and Scott Matthews?) and easily tossed-off The Somethings bands that realised that their respective times were up and conventional guitar-based songwriting had reached a nadir.

And that's not any particular kind of dig at Cherry Ghost, or Beneath This Burning Shoreline. But theirs is a style and a sound effectively signed off by Elbow's The Seldom Seen Kid. There's just so much about ...Shoreline's poetic, implicitly romantic and overtly depressive discourse, and its weary – though elegant – string-laden production, that feels displaced and caught in a time that wants for something else – something that displaces us, something fictional or futuristic, something that doesn't bring us closer to the austerity of where we are now. No amount of Starsailors, Scott Matthews, Stephen Fretwells or, regrettably, Cherry Ghosts can unwind music's biological clock, or convince us that what we want is the glorious truth when what we really want is cheap lies.

That said, what Cherry Ghost do with ...Shoreline, they do well; and considerably better than what they were doing with Thirst For Romance. Conceived in some of Europe's more complex industrial monuments – Rome and Berlin, ...Shoreline's songwriting is more confident and larger in scale, as though inspired by new people and culture and awed by the grandiosity of foreign architecture. As before, the grey tones and gritty textures of Simon Aldred's Dickens-meets-Loach songwriting still engage more like literature and film than the verse-chorus-verse constructs of song. But for Shoreline, Doves' producer Dan Austin takes what may have been limp urban sketches and works them into quasi-anthemic paeans to lives that poets like Aldred capture, while others neglect.

Although Aldred is, undeniably, still Cherry Ghost's nucleus, ...Shoreline's success is really down to Dan Austin and the greater degree of musical input from the band's other members. Opening track, 'We Sleep On Stones' sinister tale of impending murder is whipped into a suspenseful frenzy by panic-stricken strings that could score the climax of a Hitchcock film. 'A Month Of Mornings' gallops across deserted city nightscapes to brooding minor piano chords and driving guitar riffs. Elbow doppelgänger 'Kissing Strangers' is an affecting city romancer, even if Aldred's nasal baritone can't match Garvey's angelic tenor. In fact, Elbow's ability to combine pop, honesty and subtle sonic invention influences Shoreline to a near-embarrassing extent. Underdog-championing 'Luddite' is another case in point, borrowing as it does from Elbow's soaring, zero-to-hero aesthetic. If the kinship of Manchester Bands is hardly anything new, there's an irony in a Doves producer helping to make Cherry Ghosts sound more like Elbow.

There is more to it than that, though. Album centrepiece 'The Night They Buried Sadie Clay' bears more in common with the sleazy, bluesy alt.rock of Nick Cave and the Bad Seeds than anything closer to home. Elegant strings, marching drums, funereal Mariachi brass and the baroque, reverb-strewn atmospherics of early Scott Walker conflate to form a fitting eulogy to the fictional heroine. Pickings are a little slimmer from here on in. But the band's experimentalism (or is that Austin's?) give ...Shoreline angles that Thirst For Romance never had the appetite for. The final two tracks, couched in beautifully-arranged strings, close proceedings like film credits for an ill-fated romance.

So, an album about trapped lives, lives caught in time or by The Times; and an album itself trapped in times that aren't so kind. I don't think Simon Aldred will be the only one thinking there's something poetic about that.