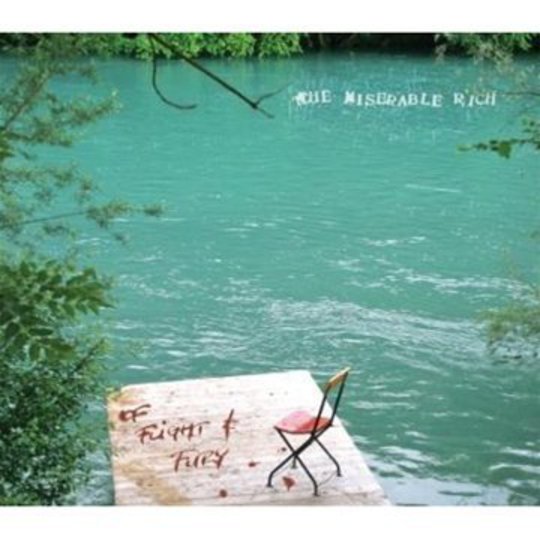 "Do it my way, lines of cocaine," suggests James de Malplaquet during 'Chestnut Sunday,' and you can't help but think that, christ, things in this country must be going a bit shit if even The Miserable Rich - who came across on debut LP 12 Ways To Count as an assortment of jovially tipsy aristocrats- are having to hit the hard stuff.

The chamber group aren't strangers to exploring the perils of life's vices; much of that 2008 debut arrived drizzled in alcohol, with tales of weekend binges and ensuing hangovers. It was playful though, de Malplaquet hadn't quite got to the stage where he'd tipped red wine over his evening's would-be conquest and ended up sobbing into the pavement. This time round you sense that not only has he succeeded in doing that, he's also perhaps gone further and hurt not only folk he might actually care about, but himself as well. The binging seems heavier, harsher; 'For A Day' sees the quintet's usually serene string section amble queazily stagger through verse and chorus, a feeling of things not being quite right, whilst their front man sneers "everyone's high, cocooned in their seclusion." The hangovers are more fretful too; de Malplaquet admits as early as opening track ‘Pegasus‘ that "it grows colder still," an admission, perhaps, of increasing descents into late nights and morning shadows. Indeed, if you view Of Flight And Fury as a procession of revelry and ensuing daylight regret, then final track 'Hungover' is a summary of everything that precedes it and that, despite the induced highs, the overriding feeling that lingers consequently is the hangover.

Of course, what really impressed last time out was the group’s daintily pirouetting string arrangements, flitting about the bawdy tales of drink and girls with a sense of innocent purity, and so it remains here. As part of the much larger Wilkommen Collective (whose members also include Sons Of Noel And Adrian, The Leisure Society and Shoreline,) it's quite hard to keep track as to who's providing the backing here; but it would seem that collective founder, cellist Will Calderbank, and ex-Hope Of The States man Mike Siddell are still on board. The latter's delicate violin strains light up much of the album whilst rarely feeling like they're battling for centre stage. Only during four brief interludes does the violinist truly take charge, nimbly guiding the group onto the next set of swooning tales of hedonistic woe.

The trouble with such gorgeously sweeping arrangements (and they are gorgeous, you feel like you could almost reach out and embrace the fluttering textures that dance around 'Bye Bye Kitty,') is that they fall quite apart from the emotional tenor of what de Malpaquet is trying to convey. Only on 'The Mouth Of The Wolf' and the aforementioned 'For A Day' does the music match the unease of the lyrics, and for this reason they're possibly two of the finest tracks The Miserable Rich have concocted in their career thus far. The rest is going to be hard pressed to receive the judgement of anything other than 'pretty' to casual listeners. This isn't to say juxtaposition on a record is a bad thing - far from it in fact - the trouble is that it feels at times misplaced here at times; major key swells and flourishes act almost in denial at the innebriated struggle the main protagonist is putting himself through, leaving it hard to really get your teeth into the lyrical content.

However, this doesn't detract too much from an album that doesn't sit too far behind The Irrepressibles' majestic Mirror Mirror in terms of the year's flamboyant chamber-pop offerings. Whilst The Miserable Rich don't match the intense emotional peaks and troughs of the baroque ten-piece, they make up for it by subverting such exuberant instrumental craft with an understated humble charm. If they can't quite plumb the depths of mood they suggest they want to at times, then it's probably because they still come across, at the end of it all, as jovially tipsy aristrocrats; something that might be an admirable trait should our isle continue its descent down the U-bend.