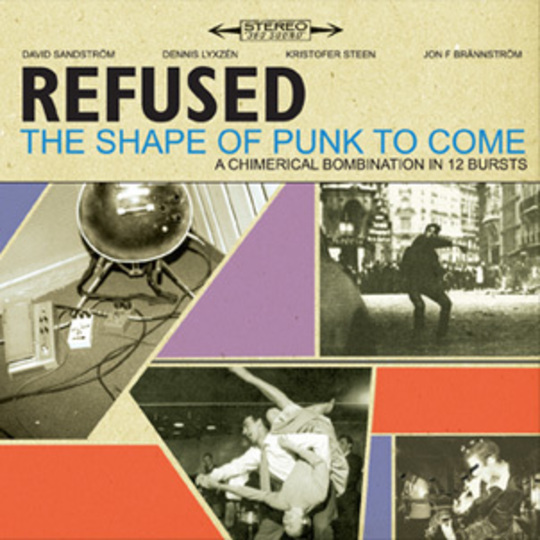 Almost thirteen years have passed since Refused played their last. Wracked with self-doubt, fatigue and disillusionment, Dennis Lyxzén, David Sandström, Kristofer Steen and Jon F Brännström spiralled from each other, leaving the world with their final, posthumous manifesto: The Shape of Punk to Come. A farewell communiqué which was as ferocious as it was laboriously crafted; a kaleidoscope collage of instruments and samples, polemic and radio static, which fulfilled its prophetic title perfectly, disturbing the waters of popular music for all who heard it and inspiring many with its fearless, eloquent creativity.

This deluxe edition consists of a remastered version of the album in full, along with the Steen-directed 2008 band documentary Refused are Fucking Dead and a previously unreleased live disc, recorded on April 3rd, 1998 at Umeå Open festival in Sweden. The latter is an incendiary, if inessential account of the band’s onstage might, which nonetheless easily outstrips the shaky, distorted live videos included as a bonus on Refused are Fucking Dead. The slightly hollow, empty atmosphere of the live recordings evokes an intimate affair, but this makes the band’s commitment to giving their all at every live show even more apparent.

Refused are Fucking Dead is a masterwork in musical documentation, where interviews from the band and their closest allies, live footage, recordings of their hometown Umeå and a terse, grandiose soundtrack are expertly cut by guitarist Kristofer Steen to tell the bittersweet, human tale of the band’s genesis as an exciting, vital project, and its subsequent downfall amidst disappointing live bouts, personal breakdowns and ethical and intellectual conflicts. Those unfamiliar with Refused will find the beauty and the tragedy of the band, the final heartfelt words of the narration speaking volumes about the message and convictions of the band: "be creative, be alive, share every gift and every passion you have to offer, we all need all the help we can get. Remember: Refused never got to play their last show for us." We are reminded of the significance of Refused by the police officers who cut short the band’s final show. To them and to many others, they were just a bunch of kids breaking the law in a suburban basement. But to so many of us, the band were much more important than that, they were a clarion call to the creative and the angry and the revolutionary that should never be forgotten.

You can well imagine the band themselves, with their anti-capital, anti-self-deifying tendencies, along with their insistence that: "All that we have to say has been said here or in our music/manifestos/lyrics and if that is not enough you are not likely to get it anyway", being furious at the idea of this reissue (if they hadn’t always anticipated such a cynical act of capitalism, that is.) Or perhaps one might have the sinking feeling that for all their sloganeering back in the 90s this release could be the band ‘selling out’ to make some admittedly well-deserved cash. While The Shape of Punk to Come being given the ‘special edition’ treatment does leave a slightly bitter taste, it’s best to push past that. The material here deserves to be celebrated, and to be unleashed to as many receptive ears as possible. As for every new imagination captured by the vision, the art, and the fall of Refused, it will have been more than worth it.