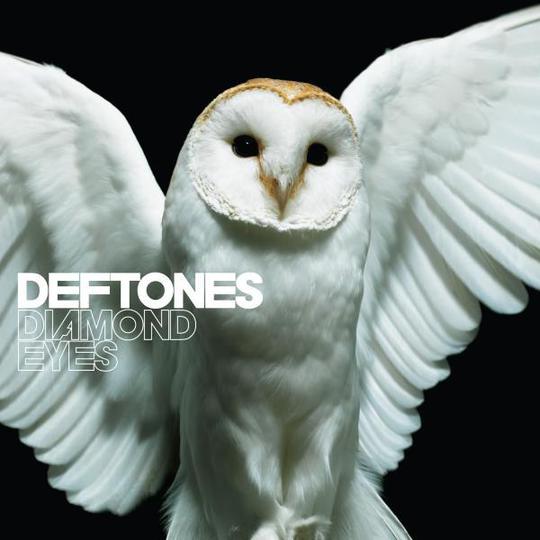 Diamond Eyes is Deftones' sixth album since 1995. It's arguable that they hit upon their luxuriously savage sound somewhere between 1997's abrasive Around the Fur and 2000's epoch White Pony. Although within each of those and their subsequent releases, there have been attempts to subvert themselves – like the soft electronic experiments of 'Teenager', 'Lucky You' or 'Pink Cellphone' – their unique blend has often overridden these disruptions to the flow. So when 'Diamond Eyes' shears frequencies with its staccato two note bludgeon and Chino's velvet tones both levitate and erupt, it's as comforting as it is exhilarating. Somehow Deftones have echoed the exotic contrasts that have always existed within their music with this duality.

Following the reliably exceptional opener, we're quickly assaulted with every facet of Sacremento's finest. 'Royal' brandishes high impact, raw-throated drones. 'CMND/CTRL' is an unexpected harking back to their debut Adrenaline with a syncopated rap-metal riff before nailing delectable sonic familiarity with its chorus. 'You've Seen The Butcher' permeates the imagination with hesitant, palm muted guitar aches and a seductive wander through seemingly infinite vocal reverberation. So on it goes, weaving through hip-hop back-beats, simple yet evocative lead lines and that plume of phoenix flame that marks the onset of each song's plateau. Throughout you are riveted to your seat, searching amongst the debris for something as gripping and breathtaking as 'Digital Bath', the salacious brutality of 'Be Quiet and Drive' or the arcane violence of 'Elite'. And just like previous album Saturday Night Wrist, you realise highlights aren't immediately forthcoming and that multiple full-length listening is the only way to relate to the work; to lose yourself in the decadence, the irrevocable descent and the hazy, shimmering silhouettes this remarkable band conjure.

Of course when the spotlight falls on certain moments, they are revealed as sublime as anything else in their canon. The aggressive four line imploring in 'Prince' – “You can't stop now, rung by rung, almost out / covered in black and gold, no one cares and no one knows / my gift to the world outside, it's okay, I'm alright / now open your empty hands cause here comes the fun here comes the end” - the unearthly screech of “GUNSRAZORSKNIVES” in single 'Rocket Skates', the thrumming and escalating discordance in '976-Evil' and the bottom-heavy tail breakdown on the conclusion of the title track. There is even one moment of soothing clarity on the intro to 'Sextape', which contributes as much visually through its layers of salacious lyrical harmonics as the freewheeling imagery Chino contributes.

This is the honeytrap Deftones set for you. Absorbed totally in their dangerously inviting warmth, it can be difficult to care that there is no real progress to speak of. In their hands, change isn't necessarily welcome – the outbursts of hatred for Annie Hardy's contribution on Saturday Night Wrist prove that – and while it would be unfair to suggest laziness in favour of consistency, there will be few converts and Diamond Eyes may only provoke half-hearted nods of approval.

In essence this is their most fluid recording, unbroken by exploratory concerns. This may only be due to rigourous training provided by previous records. Having continuously recited their litany there are no surprises which, initially, is disappointing. In the end though it really depends on how much you allow their music to change your world. If you feel the terraforming from their unfathomable tectonic ensemble or shudder with deep primal fear despite being safely ensconced in their embrace, then Diamond Eyes will continue to illuminate the landscape just like all that precedes it.

...and they have escaped the weight of darkness