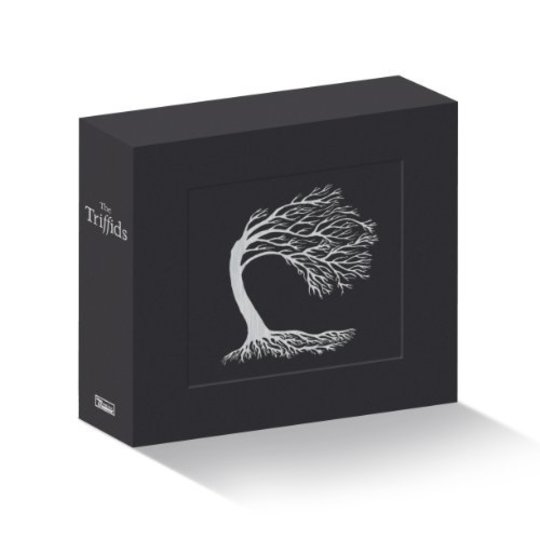 Way back in the pre-Britpop era, the Melody Maker published a paperback of Great Lost Albums, in which Andrew Mueller asked rhetorically 'why REM, and not the Go-Betweens?' It’s a question I’ve pondered for many rival bands, because the answer is always a sad combination of market forces and the unglamorous X-Factor competition that naturally selects (or de-selects) all artists. A band like the Go-Bs might be too twee, or too loose, for mass appeal, whereas an REM would get in the back of the van, and learn how to play to tough crowds. (Of course, REM also had a great intuitive surrealist whose voice sounded sensual before his actual meanings crept up on you, whereas liking the Go-Bs required a taste for metaphors that walked the line of ridicule.)

So – in a race between Australians only – “why The Go-Betweens AND The Bad Seeds, but not the Triffids?” Pitching their tent somewhere between the Twee and the Bad-Ass, the Triffids should have been contenders… and almost turned coming-from-the-most-remote-city-on-earth to their advantage. They had the literate lead-singer, with the heroin habit (David McComb); they had a future member of the Bad Seeds (Martyn P Casey); they had a female singer for duets and twee solos (Alsy MacDonald); they had their own take on country rock… and they had string arrangements years before the Bad Seeds. Oh yes, and they had that sine-qua-non of Antipodean pop: the male voice choir, sounding both spiritual and rugged.

If the previous Best Of (Australian Melodrama – worst artwork EVER) suggested The Triffids were unsure where they stood (but had the songs to guarantee cult status) the box-set explains it all: you’d be overwhelmed if you had this much material to choose from. Basically, this 211 (that’s Two-Hundred-and-Eleven) track box-set offers up a slightly re-sequenced Best Of; four CDs of early material, running to almost five hours; three live shows from St Kilda (1984), LSE (1984), and Melbourne University (1988); and the Jack Brabham sessions.

Perhaps most desirable here is CD2: Early Singles and EPs. Without being overtly twee, it’s where the band sounded the closest to The Go-Betweens, or early Belle & Sebastian. Gradually, the darker songs creep in (‘Twisted Brain’ and ‘Left to Rot’), but so do the songs with simple violin arrangements, culminating in ‘Beautiful Waste’ where trumpets join the strings. By ‘Bright Lights, Big City’, where the Hammond swirls eerily as the drums pound, they’ve shown themselves almost the equal of the Bad Seeds, even managing to pull off a nine-minute cow-punk epic (‘Field of Glass’).

The six early cassettes offer a glimpse of the teenage Triffids in their wonky DIY phase: a little bit Half Japanese, a little bit Moldy Peaches; often, uncannily like Beat Happening before Beat Happening. Granted, they lack the laugh-out-loud jokes of the AFNY bands at their best, but it’s always endearing, like The Quadratics in Todd Solondz’ debut, Welcome to the Doll’s House, especially on 'Philosophical Stroll' with its coconut percussion and everyone a beat behind everyone else, or a note below, yelping “grow old! Grow old! Philosophical stroll – if you can’t dig it, it’s your bad luck!” By their fifth cassette, The Triffids have written the first track to get a proper release (‘Farmers Never Visit Nightclubs’), and tightened up considerably, with prominent, chiming bass lines; plus, McComb’s geeky, adolescent lisp has all but vanished, as the singer flirts with a more yobbish persona, not unlike The Feelies (in the US) or The Television Personalities (in the UK). Still, they’re not faking anything, being aware of their own preposterousness when they sing: “surfer boy, surfer boy / in chains and leather” ('Surfer Boy in Leather') against chirpy keyboard lines and the first female vocals appear (hopelessly out-of-key). In fact, the punk stylings are gone as soon as they arrive, replaced by a dalliance with Sixties pop pastiche. Frequently, McComb predicts the coming of Stuart Murdoch with his own line in comic juxtapositions, puncturing the sentiment (“Now the orderly takes your elbow / now the angels want back their halo”).

Moving on… it’s impressive just how tight the live albums are, compared to the foregoing five hours. To be brutally honest, the St Kilda set (April 1984) sucks – sound and song-choices both – but by October 1984 they’re playing some of their classics, and by 1988 they’re playing a set to rival the Best Of, likewise opening with ‘Wide Open Road’, with supreme confidence; it’s keyboard-heavy in lieu of a choir, but this makes it an essential alternative version of their best song, rather than a weak compromise. The only mystery is why the band repeatedly murder ‘I Can’t Help Falling in Love with You’, having learned nothing from 1984 to 1988. David McComb is a fine crooner in his own right, so why leave out all the grace notes and glide, belting it out one word at a time? To be fair, the Elvis-in-Hawaii arrangement (for the 1988 version) is a reverent fan’s joke, but it’s not a classic cover. In a similar vein, the retro-country and synth-schmaltz pastiches on the Jack Brabham sessions occasionally fall flat as jokes (e.g. the Kraftwerk cover), as they hadn't when the band actually were kids, but you get surprisingly good covers of Madonna, the Velvets, and a version of the Pet Shop Boys' 'Rent' that is absolutely stunning. Look out for an interview hidden on CD5, as well.

Wide Open Road: The Best of The Triffids (on one-CD)

Cannily, Domino have promoted The Triffids’ anthem of tragic romance to the title-slot – ‘Wide Open Road’ was always the favourite, because it blows up the idea of being suddenly, painfully single, into a widescreen drama (“my head was big and empty / my chest filled to explode / I yelled my insides out at the sun / it’s a wide open road…”). With a vision of the desert as bleak as Nebraska, David McComb makes a case for himself as the Australian Springsteen, and it’s because he doesn’t actually sound like a redneck when he’s doing his outlaw shtick, that you can still identify, as a lovelorn student, in 20th or 21st century Britain.

Omitting the ultra-twee early singles, the compilation still has to reconcile two very different (very precious and very butch) sides to the band, and only a 10CD arc can make sense of that – you literally have to hear them growing up. In this light, ‘Bury Me Deep in Love’ (their commercial high point) is both an anomaly (for its orchestrated bombast) and the song McComb had been writing for his whole career (every other metaphor he wrote is about being lost in the wilderness, because when you come from Perth, you know loneliness like no-one else). Like Leonard Cohen’s synth-gospel years, it’s a song that goes through cheese and out the other side. The scenario for the Hollywood adaptation: a climber is lost in the mountains; an avalanche almost kills him; back home, in the little church in the valley, everyone’s praying; somehow the power of love saves him, like a warm avalanche, holding back the snow. Keep listening to lines like “you may lose me on the East face, you may lose me on the West”, though, and the chorus (“take me in! under your skin! Bury me deep in love!”), and it’s hard not to think he’s singing about burying himself face-first between a lady’s thighs. After all, it’s the one of the few places McComb doesn’t point to the metaphor being a metaphor, something the producers of Neighbours missed when they chose it as Madge and Harold’s wedding song.

Everything there is to love about the Triffids comes together on ‘Jerdacuttup Man’. Singing “I live under glass / in the British Museum / I am wrinkled and black / I am ten thousand years…” McComb really makes you feel for the guy who “once lost in business / and once lost in love” and then (what a shmuck!) fell in a tar-pit, or peat-bog, so that now people from all over the world look at him and gawp. The theatricality of the band comes through in the timing of the line “o-o-o-o-old and lonely… dirty and cold / I a-a-a-a-a-am the Jer-da-cut-tup Man” making you feel strangely affectionate towards him.

Newcomers – start with the compilation, or the undisputed classic, Born Sandy Devotional. Old hands – you know you want this. The remaining Triffids play the Barbican, London, on Friday, April 9th.