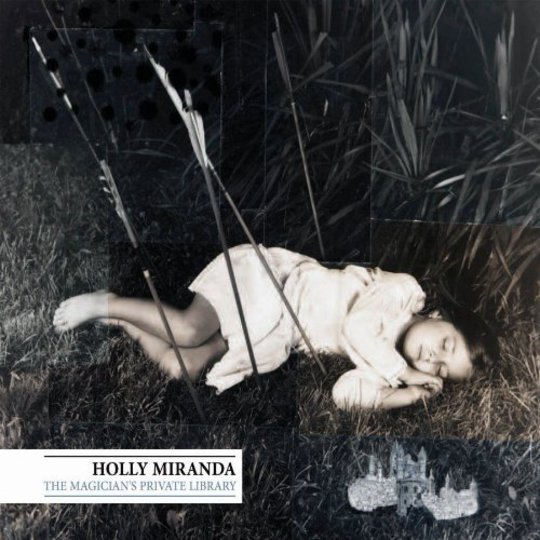 You will know within a few moments of listening to Holly Miranda whether on not she is going to ring your musical bell. Having spent her youth in her native Brooklyn with punk band The Jealous Girlfriends, Miranda has now branched out alone and picked up her neglected acoustic guitar to craft a modern folk sound imbued with melancholy. If that doesn’t perk your interest then take heed of the album's contributors, chiefly producer Dave Sitek of TV On The Radio and his bandmate Kyp Malone, who makes various vocal appearances.

With this blog straddling zeitgeist pedigree, it is a shame then that her debut solo album does not have more substance to it. Like so many US indie acts at the moment, Miranda makes music so laid back and wistful it struggles to engage or ignite any true feeling in the listener beyond a mix of tender relaxation bordering on apathy. That’s not to say Miranda isn’t talented, nor that The Magician's Private Library isn’t worth pursuing. Sitek’s production is impressive throughout and shows a less seen side to his technique. His previous work with the likes of his own band, Yeah Yeah Yeahs and the famously deserted sessions with Foals have pushed the Brooklyn don close to parody as he drowns yet another hipster act in reverb. On ‘TMPL’ however he takes a back seat, allowing Miranda’s brittle vocals to sway gently over a mix of strummed guitars, under stated brass sections and delicate beats. At no point does anything sound like it was recorded at the bottom of a canyon.

Having said that, to contextualise this record amongst Dave Sitek’s previous work, it would be holding hands and arousing indie boys next to Scarlett Johansson’s ill advised debut solo album Anywhere I Lay My Head. Individually tracks such as ‘Waves’ and ‘Sweet Dreams’ posses an innate beauty akin to the likes of Beach House, while the Malone-featuring ‘Slow Burn Treason’ is similar to Bon Iver and St Vincent’s sublime duet from the recent Twilight soundtrack. Grouped alongside one another, however, and Miranda’s songs are so delicate and ethereal that they melt into one another, rendering this album's forty five minutes difficult to remember. There are, however, moments where the pace quickens, such as ‘High Tide’ and opener ‘Forest Green Oh Forest Green’. These relative highs give a spine on which the light and floaty core of the album can fly free. It's the middle section that's the let down, so immersed in creating a mood it feels lost in an ambient atmosphere, thus failing to register any actual feeling or emotion.

Symptomatic of a trend running through indie music at the moment this album feels like the background music of a culturally aware dinner party. Holly Miranda makes nice music, sometimes really pretty, but it doesn’t say anything real or move emotions to anywhere even nearing an extreme. As a result The Magician's Private Library fails to tick that most important box: evocative.