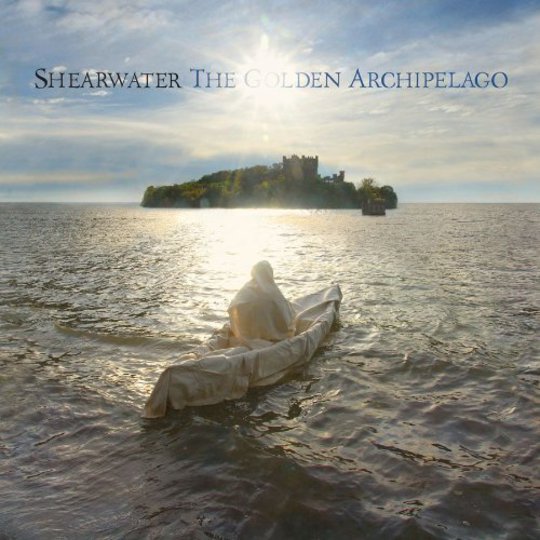 If you’ve visited Shearwater’s website over the last couple of months, you’ll have been greeted by an arresting, scratchily-filmed series of images – of mist over mountains, damaged flags and roiling sea-waters; of travel journals and captains’ logs, bloodied bird carcasses and satellite grabs. It’s all part of the story.

See, The Golden Archipelago is Shearwater’s most ‘visual’ project yet. While their records have always been packaged in beautiful cases illustrated by watercolours or drawings of various species (frontman Jonathan Meiburg is a well-documented bird-watcher and voyager), for this album they went the extra mile. Meiburg and designer Mark Ohe created several ‘Golden Dossiers’, visual guides to the music comprised of images and manuscripts collected by the singer on his travels to various islands and other remote locations. Each dossier is an eerie scrapbook of snatched history, of black and white photos, of hastily-written diaries and long-forgotten legends.

But, while such specific foregrounding definitely encourages you to identify these kinds of themes while listening to The Golden Archipelago, it’s not like you wouldn’t have come to similar conclusions by yourself. As with all of Shearwater’s work, this album is soaked in maritime imagery, populated by lonely explorers and watery vistas. This stripped, salt-bleached and gladly uncivilised realm is and has always been Meiburg’s world; and it’s a world that is there for any one of us to find if only we would walk – or sail – until there were no buildings left.

The Golden Archipelago is more a return to the reverent, quiet majesty of Palo Santo (2006) than a continuation of Rook (2008)’s rather grandiose manifesto – and it is a tone that suits this record’s subject matter far better than Rook’s tendency toward the over-dramatic ever could have done. It is more fluid, more subtle; as such, it pulls you in gradually, irresistibly, its icy black under-current taking hold when you least expect it.

Drummer Thor Harris’ percussion is the album’s real axis; unguent, it slip-slides through ‘God Made Me’ and ‘Castaways’ as though moving through a thick gel, while for ‘Landscape at Speed’ it is uproarious, double-deckered and full of fury. Wet-sounding and thickly slick, Harris’ tones decide each song’s direction – the pianos, injured guitars and Meiburg’s vocals all follow its lead.

Meiburg’s words are often difficult to decipher because of his tremulous delivery – but this is frequently the reason his voice is so powerful, able to sound as animal as it can human. And, as we know well by now, that liquid hoot of his can all too suddenly shapeshift into an unchained holler – and ‘Corridors’, ‘Black Eyes’ and ‘Uniforms’ are prime examples, all regal and nasty.

As Meiburg’s voice buffers the bruising swell of ‘Black Eyes’, it is as though it is butting and bouncing off the waves itself, defiant as the prow of a boat racing toward the ragged cliff walls. His saltwater gargle is an angry, desperate string of vowels, and its meaning is conveyed through its urgency and intent rather than through the words themselves. The words, instead, are lost in the sea froth and twisted by the cavernous acoustics of uncharted land.

It is difficult to write music that addresses either the delicate balance or the ever-more-rapid destruction of the planet without over-egging it – without the finished piece coming off as trite and/or the writer coming off as a wannabe eco-champion who’s just in it for their own ego. But The Golden Archipelago is a record that explores this turbulent and terrible time in the life-cycle of our earth without preaching, without getting pious. It makes its statement simply by describing the things we stand to lose, their power and yet their precariousness.

And that is surely one of music’s greatest abilities, when it is done well – rather than over-complicating and abstracting our surrounds, it can simply help us see what already exists as though we are looking, for the first time, with clear sight. This is one of those records; and, hopefully, Meiburg’s respect for and evocation of a wild, untamed and ancient environment that we – sitting at our desks and our screens – hardly ever see will affect some of you as deeply as it always does me.