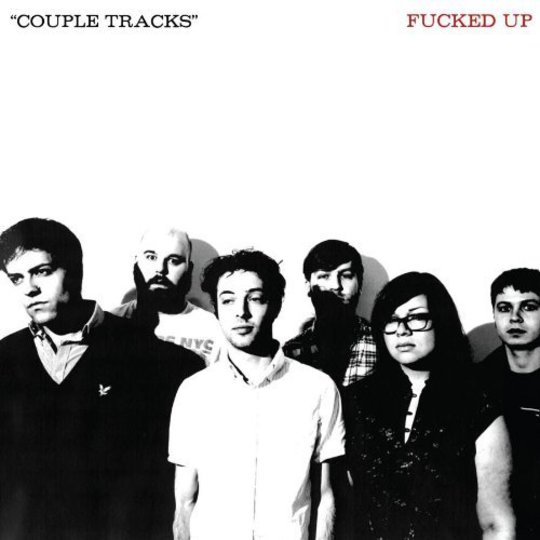 In early 2007 Fucked Up were playing at Mercury Lounge, a relatively small but reasonably respectable club on New York’s Lower East Side. It was their first New York appearance since the Canadian band had been forced to cancel a slot at the CMJ Marathon a few months earlier due to visa problems. Frontman Pink Eyes (or Damian Abraham, if you prefer), related this story in conjunction with their border crossing to the current gig. Upon being told the name of the band, the immigration officer had replied, “You’ll never get anywhere with a name like that.”

But this was before the release of The Chemistry of Common Life, the album that became the last decade’s foray into hardcore for the non-hardcore kid (for the Nineties’ example, please see The Shape of Punk to Come). This was a time when the band had one full length to their name and roughly five million singles/7-inchs/spilts/etc across just about as many record labels. Hyperbolic, yes, but only slightly; Couple Tracks is Fucked Up’s second compilation of singles and rarities, following Epics in Minutes. The two compilations combined do not even come that close to accounting for their complete non-LP output.

This 25-track double album is divided up into two parts, the 'Hard Stuff' and the 'Fun Stuff.' This neglects to consider that the two are not mutually exclusive: considering the singer of the band has been known to all but assault the attendees of their gigs, many fans would probably argue that Fucked Up are fun because they’re hard, or at least fast and loud. Under the leadership of a less shouty vocalist, they could easily be categorised as a rock band, and with a particularly melodic singer possibly even an edgy pop band. Instead we have been gifted with a mammoth of a man and his socio-political and religious musings growled over catchy tunes rather than just distortion covering up three-chord tedium. This has led some to argue that Fucked Up are no longer a hardcore band at all, which does lead to the grander question of whether proficiency in one’s instrument leads to expulsion from the greater punk community, but that may best be left for another occasion.

As the career-spanning Couple Tracks reveals, Fucked Up have always been reasonably consistent in their output. The opening track is their debut single 'No Pasaran', and very satisfyingly it's the roughest of the tracks. It does feature that covert pop sensibility that makes them so curiously appealing, but also features the drum loop that every punk band uses in their early work (namely pounding the kit in an unvarying way, typically without cymbals). Over the years, they have gotten tighter and possibly more sophisticated, but still lack any polish or sheen (which of course is a good thing - who wants a punk band with a smooth surface?). But this consistency makes every B-side worthwhile. Even if Pink Eyes is taking the piss (“The mosquitoes!...The rhinoceros!”), his delivery is unwavering. It makes a song like 'He’s So Frisky' seem, perhaps, less whimsical than it’s intended to be.

The five unreleased tracks aren’t exactly the incentive they seem for completists; of the unreleased tracks, two are different takes from The Chemistry of Common Life, quite a bit shorter and snappier but not dramatically different. Two others are Daytrotter sessions, which surely have been downloaded ad infinitum (if you haven’t yet, the downloads are still available). But those who don’t want to trawl ebay and other such sites for the out-of-print singles will be happy to have these fabled tracks available to them. It’s just a shame that a release a mere month ago would have allowed more people to fit 'David Christmas' on their festive playlists.