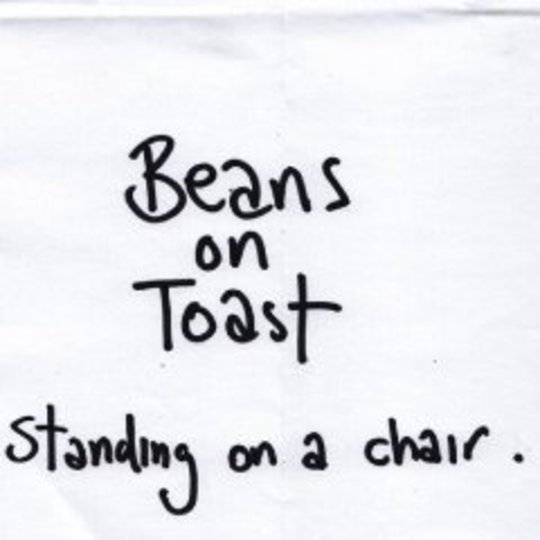 Beans on Toast has been an enigmatic figure on the scene around London for the past couple of years. The gruff troubadour has made his name playing Glastonbury four years in a row, singing his austere songs atop a chair. That is where the title of his long awaited debut Standing on a Chair comes in….

For as long as he has been performing, Jay McCallister has joked that all his songs have the same chords and he sounds like Billy Bragg. I won’t comment on the second part (I don’t have enough space to get into it) but until now he’s been dead on about all his songs having the same chords. It was endearing, though, to hear his raspy, enthralling voice over the same little guitar ditties, because his songs never appeared to be about the music. They've always been about wry social commentary (some funny, some accusatory, some that worked and some that didn’t) and his comical narratives that somehow always include drugs or alcohol.

The 50 song Standing on a Chair allows Jay to show off what he does so well – get up on his soap box, grin, sing some hilarious songs on his children’s acoustic, and have a laugh. But he also takes some liberties with a piano, with actual singing and electric guitar. The new avenues that Jay experiments with, aided by producer and friend Ben Lovett of Mumford and Sons, work in his favor to varying degrees. The fear of sounding like a Bob Dylan detractor in the Sixties won’t stop me from saying that the electric guitar and piano and circus sounds divert the attention from what is great about Beans on Toast.

Jay has never come off as a proficient musician; not on the acoustic sessions that he has released on the internet and certainly not live. Standing on A Chair will certainly not change that perception. However, it is his ethos, it’s what he’s about that make his rudimentary songs extraordinary and worthy of listening. Having said that, the exorbitant amount of tracks on this album takes away from what it could be. When you have a jungle of 50 songs to get through, the best ones are sure to get lost in the jumble. ‘Fuck the Smoking Ban’ is a hilarious take on what was lost when smoking was banned in clubs. ‘I Fancy Laura Marling’ highlight Jay’s love for the young and talented chanteuse Laura Marling, even if it is an April-September/inappropriate kind of love. ‘M.D.M.Azing’ is a wonderful tune about new lovers who meet at a festival and bond over drugs. Another love 'ballad' about drugs, ‘Coke’ works wonderfully live as Jay asks everyone to raise their hands if they are addicted to cocaine, no matter who you are – everyone raises their hands. These tunes are what make Beans on Toast appealing, his mastery of a smooth, glib manner with his sardonic tone and his excellent use of rhyme.

If you hear Jay’s songs and hear his message, this album will amuse you for hours on end. If you don't care for his sense of humour, then let's be honest: the thing takes forever to get through and it won’t be an enjoyable trek. But if you can make it through all 50 songs (the longest being just over three and a half minutes!), not only will you get a pat on the back, but you’ll be privy to the peculiar, intelligent ramblings of a man who has been places and seen things, who can rhyme fully and partially but can’t play guitar, but who doesn’t let that stop him from making a winding album of songs that have been kicking around for years but are somehow still relevant and outstanding.