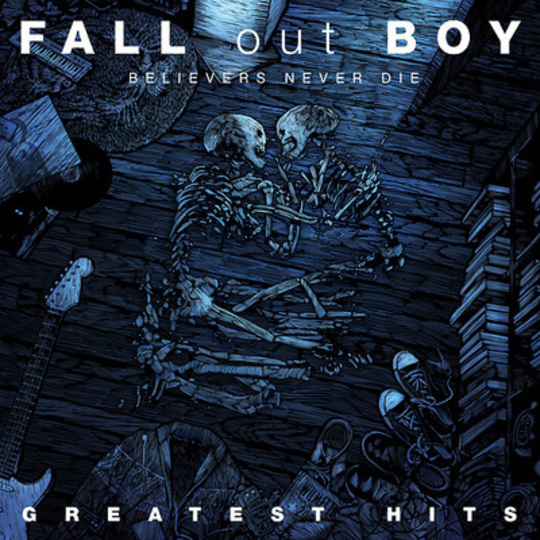 Oh, it most certainly is Christmas. After all, that apex between October and November has beckoned as such with it’s pre-emptive huh-huh-holidays-are-comin' marketing bashing our feeble brain matter. More importantly for us music lovers though, Christmas = greatest hits compilations. These shallow attempts to boost some sales should be forgotten in favour of the musical aspect of such things, but with Believers Never Die, it becomes almost immediately apparent that it’s going to be a difficult bugbear to ignore. There are plenty of ‘kids’ my age (at the obviously adolescent age of 23) who will almost completely shun a cynical corporate rock band like Fall Out Boy. Yet, with their DIY attitude, stories of heartbreak and their geekish charm, FoB stood as something unique and cherished; perhaps, maybe, just maybe, this compilation will win some of them over?

As way of an introduction to the band, Believers Never Die, provides you (yes, you, the one who had previously shunned them so quickly) the option to discover the brilliant pop rock hooks loved by oh-so many mallrats. The first five tracks chart the bands rise perfectly, stemming from the vibrant energy of 'Dead On Arrival’ and ‘Saturday’ to their break-through hits ‘Sugar, We’re Goin’ Down’ and ‘Dance, Dance’, all harking back to those long lost days of Punk Rock Vids, back when MySpace was a fun, relevant and popular social networking platform.

But then comes that aforementioned slide and the 'Greatest' bit of the record title becomes incredibly paradoxical. Those old fans may have a valid argument calling them 'sell-outs', seeing as the quality of the material does actually take a pretty dramatic drop come about half way through. Tracks like ‘Thnks Fr Th Mmrs’ and ‘America’s Suitehearts’ are gluttonously shined in their production. While it could be argued that the radio and telly exposure they have garnered over the career could warrant such sheen, their experimental tweaks with strings or token 808 kick drums rub completely the wrong way and are a reminder they are now a band somewhat bereft of any of that old exuberance.

When superstardom superseded their underdog status, creativity was the clearly the loser. If there was to be one point where this is at it’s most evident, it’s the cover of Michael Jackson’s ‘Beat It’. No, just NO! There’s no doubting their musical ability to cover that track but there are some sacred things that just have to be left alone. It comes off as a vein attempt to prove that they are worthy of such universal acclaim and does no justice whatsoever to the original version. Considering Wentz’s own lyrical abilities, it just stinks of a cynical attempt to reaffirm some geek status, whereas it actually has damn near the opposite effect.

I could go on but let's not waste any more time: the tiny slice of new material in the form of ‘Alpha Dog’ and a DVD full of video treats, doth not an the greatest of introductions or gift for a fan of the band make and it probably won't stave off the cold you may feel towards them. Now, beat it...