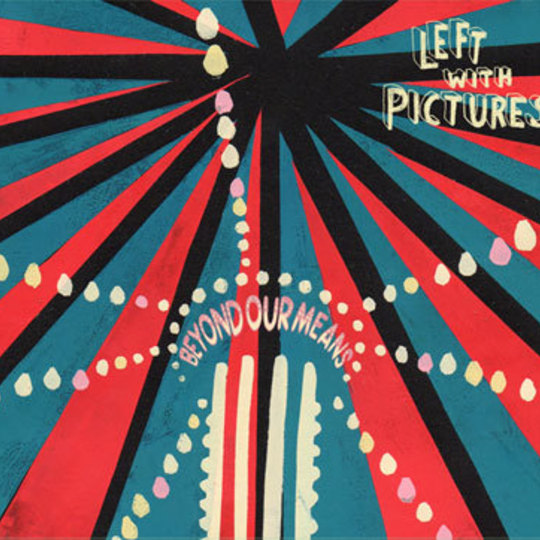 We’ve always had a special connection to pop music in this country. At the risk of being immodest in a way that is unbecoming to an Englishman, I’d hazard a guess that this is because pop music is something we’ve always been pretty good at. And really, everybody likes pop music in one form or another, be it X-Factor-tainted radio-pop or something more cerebral. A well-constructed and catchy song is one of life’s great immutable pleasures.

This is a fact which is clearly not lost on London band Left With Pictures. Having formed at university and played around with their sound, they now come armed with an array of folk instruments and a mission to restore classicism to pop music. These ingredients, coupled with a dauntingly prodigious ear for melody, have brought about their debut record Beyond Our Means, which is a collection of chamber pop of the most elegant kind. It’s charming, likeable and about as English as it gets.

The record blends breezy pop songs with more hazy, dreamy pieces. Recent singles ‘Every Stitch, Every Line’ and ‘Her Father’s Nose’, hinge on jaunty melodies and playful choruses. Both are wonderful examples of the band’s enviable proficiency with pop‘s holy grail, the ability to create something that is at once memorable, catchy and extremely moreish. The album’s title track is another great success, sounding as it does like a drunken singalong in the politest pub you could ever imagine.

As comfortable as they are with bouncy melodiousness, Left With Pictures are equally adept with a more pensive approach. On ‘Yours, Tom Maclean’ singer Stuart Barter laments that "My song-writing’s over / What could I write here in Leicester?". The song is structured as a letter to a old friend, and is about as close as this album comes to anything experimental. It is mournful, but at the same time tinged with optimism.

Similar in mood, closing track ‘Ghosts of ‘89’ is a gorgeous elegy for the naive joys of youth, evoking Cider With Rosie type images of summers that seem to unfold without end: “July seemed an acre of time / Stretching out beyond Hadrian‘s Wall”. This is subject matter ideal in the hands of Left With Pictures, because one of their greatest strengths is the ability to inspire almost child-like feelings of hopefulness with their songs.

You could really pick out any song at random on Beyond Our Means and hold it up as an example of the band’s class. The album is a lesson in the art of song craft, and it is presented in such a way that I would find it difficult to imagine anyone not warming to the band on hearing it. Some people might be put off by the shamelessly twee loveliness of the whole thing, or even misconstrue its effortlessness for being lightweight or throwaway. In reality though, this is an album which is deceptively substantial and ambitious. It is paradoxically youthful and world-weary all at once, and is a late contender to be crowned the most heartwarming album of the year.