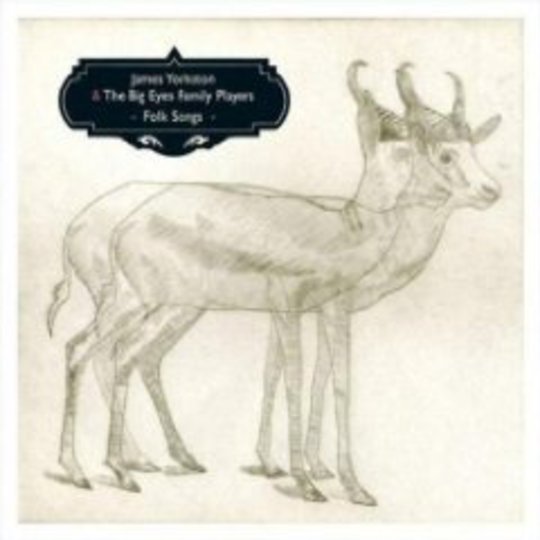 In the course of dutifully checking some dates pertaining to James Yorkston’s back catalogue, the man’s Wikipedia entry alerted me to his appearance on a compilation album released by V2 two years ago, entitled Acoustic 07. It features a Yorkston song alongside Paul Weller, Morcheeba, Aimee Mann and Rufus Wainwright, among many others whose reliance on ‘acoustic’ varies greatly. Although it blatantly exists to be purchased by the 12-CDs-a-year set, the fact that V2 saw fit to include our subject on said compilation isn’t in itself that surprising or unusual. Certainly, Yorkston had garnered a healthy following by 2007, being a regular presence at the UK’s smaller, boutique-ier festivals with his band The Athletes, while his records have largely been warmly listenable fare from his own rich Scottish burr on in. While the revitalizing of folk-rock’s commercial potential had benefitted many other artists to a greater extent than it did Yorkston, it didn’t do him any harm either.

There’s the rub: when Domino released his second single, ‘The Lang Toun’, in early 2002, they surely couldn’t have known that there’d be any extensive audience for a dude who composed ten-minute-long, harmonium-wheezy intersections of somber Britfolk and vaguely Krautrock-ish bubbling rhythm. Yet he’s established himself: Folk Songs is the fifth studio album for Domino, and couldn’t be more prosaically titled, featuring 11 traditional numbers – mostly from Britain, with one each from Ireland and Spain respectively. Does it represent a clarion call to trace back the noble genre’s knotted roots and highlight the Formica void at the heart of too much modern folk (cracks about mobile phone ad soundtracks might be pretty played out and straw mannish at this point, but they’re pretty accurate too)?

Yorkston hasn’t specifically answered this question, but he does claim to have had the idea to do this album as far back as 2000, before he’d released any material. His commitments to Domino saw the project become dormant, but it was reignited by his discovery of the music of Big Eyes Family Players, a Sheffield band influenced by avant-classical, slowcore and Eastern European folk among other styles. Correspondence with bandleader James Green slowly led to Folk Songs coming together, and the results are highly agreeable – if, to these ears at least, bearing the stamp of Yorkston far more than of the Family Players.

Cribbing his interpretations from a laundry list of Sixties and Seventies folk icons who got their versions down on wax - Anne Briggs, Shirley Collins, Nic Jones - the musicians generally make an effort to put their own compositional mark on songs. ‘Mary Connaught & James O’Donnell’ is an original track in terms of its arrangement, and is driven briskly along by a hectic drumbeat. ‘Pandeirada De Entrimo’ originates in Spain, and the violin-fuelled instrumental version here is perhaps the closest the album comes to reflecting Big Eyes’ pan-European refixes. You might know ‘Little Musgrave’ as ‘Matty Groves’, perhaps the well-known Fairport Convention version (I quite vividly recall my mum singing this to me when my siblings and I were much younger; presumably they weren’t broadcasting football or You Bet! at the precise time). It’s been attempted by an incalculable number of folkists since the 17th century; Yorkston’s vocal and the pattering guitar part lend a delicious gentleness to this weathered tale of unfaithfulness and man-to-man slaughter. Practically as well-known as a folk standard, ‘Sovay’ – the ballad of the lady who embarrasses her boyfriend by dressing as a highwayman and robbing him – shines brightest when all but the keening, tearful violin drops out.

The last 20 seconds or so of ‘Low Down In The Broom’, the closing track, finds the ensemble reaching a more raucous pace than they attempt for the preceding 48 minutes. If you’ve seen James Yorkston play with The Athletes (who remain his go-to backing band for future ventures, in case you were wondering) you may know they enjoy closing sets with a bit of a rambunctious jam. It all helps to remind us that this highly talented, consistently modest Scotsman isn’t easily put into a box for the selling; Folk Songs probably won’t soundtrack a woman exhorting you through your flatscreen to buy yoghurt in the foreseeable, but it will be received with a deserved warmth by an established cluster of fans.