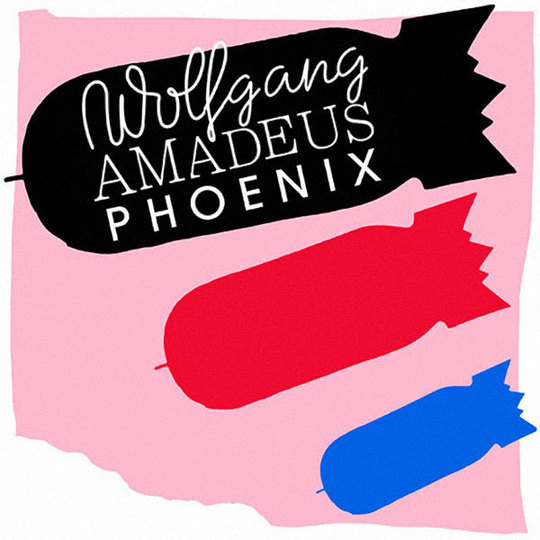 Not long before The Strokes became the coolest cats in Gotham Rock City, a small clan of Parisians aloofly lobbed a glorious ball of pop entitled 'Too Young' at an unsuspecting world. Sadly, most were rather oblivious.

As the unrelenting, floor-filling, intelligentsia-pop of the indie-dance crossover scene (Daft Punk, Soulwax, et al) galloped out of Europe, riding the white horses of hype and surfing the wake of proto-blog praise, it seemed Phoenix, for all their sophisticated suss, didn't get the memo to join the conga-line and follow their peers. Run, Run, Run, they did not. Instead, walking around, oblivious to the fact the Noughties was their decade for the taking, they danced to 'Take Me Out' and took Sophia Coppolla out for some pomme-frites soaked in garlic mayo.

Oh, of course, you could say that James Murphy and his trojan LCD Soundsystem did what Cliff Richard did to Elvis and got away with it in his homeland. It, being a 'borrowing'-cum-importing of the innovative heady mush of disco, fuzzy electronica-meets-shoegaze tinglesome rushes and p-funk. Yep, as we now know all too well, anyone can sling all the gunk of those genres into a song and create a highly intoxicating three-to-five minutes. It was nostalgia NOW, a homebrew of digitalized futurism, using melodious dollops of the past. This was back when it was exciting, back before the Hype Machine unleashed other knock-off but fairly virile strands of alt.pop/blogtronica, which inevitably led to the American Apparel-sponsored globalization of hipsterdom...

Much-like that parallel-universe-hit 'The Rat' from The Walkman, 'Too Young' found itself sandwiched inbetween Yeah Yeah Yeahs and CSS in every sweat-pit and it popped up on various Bill Murray film soundtracks. Yet, try as it did, it was always the hit that never criss-crossed-over. In fact, rather like the cherished by the elite but mainstream media ignored likes of dEUS, The Longpigs, Mew, Les Savy Fav and so many more, it seemed Phoenix were the right band, making the right sounds, in the wrong city, at the wrong time and they're still waiting for the stars to perfectly align, so that they can (meritocratically) go stratospheric.

All this time, "context-shmontext" is approximately what Phoenix have been thinking. They've not been in a holding pattern waiting for something to happen, instead they have been living it up in art-house heaven and gate-crashing fashionista parties. Meanwhile, they released 2004's Alphabetical, which was the party album Ben Folds was too American to make and 2006's It's Never Been Like That - a meticulously crafted, cravat-stroking, quintessentially Franco-pop LP, wot the wider world never did hear.

Dear wider world, swizzle on this: Wolfgang Amadeus Phoenix, one of the most focused, synapse flicking, soundtrack-to-your-summer essential records to have 'dropped' in recent memory. This is precisely the universally undeniable record I expected when I first listened to albums from The Killers, MGMT and various other rocketeers. With Wolfgang Amadeus..., Phoenix have not just captured their own Zeitgeist but consummated their promise and excelled where The Noughties Let-Downs (Dandy Warhols, Strokes, Hot Hot Heat, QotSA, etc) have failed. This is such a finely-honed and complete wake-up -> commute -> roadtrip -> festival -> house party album. It feels not unlike the ripe old uncle to Cut Copy's In Ghost Colours.

From the glorious Coldplay'ish epic keys of 'Countdown' to the duh-duh-nuh-noom-noom guitars and rum-chaser drum clatter of 'Lasso', this is a masterclass in both record production and insanely infectious hooks. They've kept to their blueprint of vocals popishly high in the mix, whilst the guitars, bass and/or drums skitter somewhere beneath it all, and temperate trickling keys 'n' sci-fi synths rush in and out as required. Less is so much more. The simplicity and respectfully restrained space the melodies are given to swim in should be a lesson to anyone trying to cram as many ideas as possible into a song. That's not to say this is lesson in frugality, or some kind of morose, keep-it-simple, let the songs do the work-ness, as this album grins with the perfect pace to crank it in the gym.

Whilst Wolfgang Amadeus... is clunker-free, with high points from start to finish, allow me to abandon my critical faculties and gush about 'Love Like a Sunset Part 1', as this instrumental is by far the most incredible moment of the album and also quite possibly the best thing they've ever done. And my song of 2009 (so far). Fans of Tarwater and Trans Am will be familiar with the pre-Battles/Foals math-rock-mashed-with-kraut/electronica joys but this somehow enters another realm, spiralling like a black hole, ratcheting up the intensity more and more before releasing its g-force grip on you and walking off into the distance like the cat that got the cream soaked salmon.

Let this record be a high watermark album of the decade. Let it be a pull-yer-socks-up communiqué to all those New Yorkers stealing our European heroes unworn crowns. If this doesn't ensnare the doubters, I don't know what will.