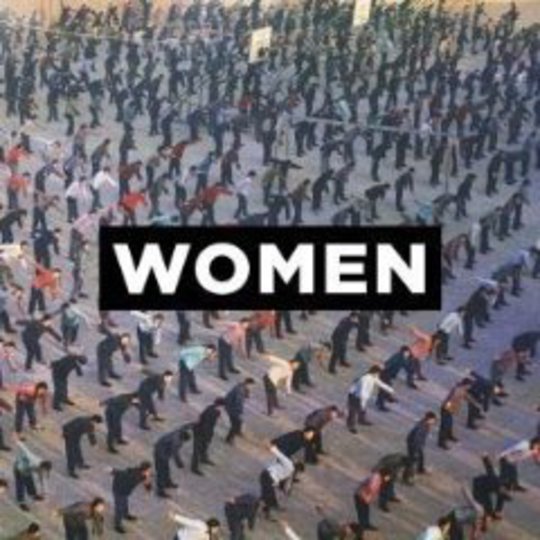 The four men who make up Women know a thing or two about confined spaces. This debut album by the band, which clocks in at just 30 minutes, is so densely packed with sound that it feels like their songs are pushing down hard on your skull. The arid air that filters through Women is in marked contrast to the band’s origins in the foothills and wide-open spaces of their native Calgary. The band members appear to have balked at these surroundings, taking a deliberately contrary step by forcing their music into a tightly compressed corner.

Like many of the best debut albums, there’s little waste here. These songs sound tight, with all the fat carefully shorn after years of practice and no-hope gigs in front of disinterested crowds. Even the unrefined leaps and jerks from one song to the next sound studied, like it’s taken hours of practice to get their gracelessness down pat. It’s easy to imagine the band furiously hammering their sound into shape while locked in a house in the woods, Trout Mask Replica-style, only to emerge in the studio to lay every track down in one frantic take.

Opener 'Cameras' is a queasy one-minute prelude, driven by militaristic toytown drums and keyboards drawn from Granddaddy’s 'A.M. 180'. The song is cut abruptly short just as it hits its stride, with Women grabbing their audience by the hair and forcing the opaque 'Lawncare' into their faces. This is Women at the height of their oppressive powers, with distressing guitar squalls dominating the track in its final third and the band members sounding like they’re all holding their breath until the song ends. The opening of the instrumental 'Woodbine,' which is again seamlessly integrated into its predecessor, is the sound of a pressure cooker being turned off, as ambient noise coils into hissy distortion and the band members slowly reapply the tension that just fell from their grasp.

The twinkling vibraphone and sweet falsetto of 'Black Rice' is the only palpable relief on offer here. Far from being an anomaly, 'Black Rice' is a welcome diversion into pop, four songs into an album that has already demonstrated more ambition than most bands can muster over the space of three or four records. There are constants at work in their music, such as the low-level tape hiss and sharp pinprick guitar sounds, but their willfully eclectic impulses make Women feel like a process of discovery, with each song peeling back a new layer of their collective psyche.

What really makes Women tick are the ancillary textures that surface in and around the songs. The eerie hum that fades in and out of 'Group Transport Hall' makes it sound like the studio doors have blown open inexplicably, allowing an otherworldly presence to wrap itself around the song. Producer and Calgary scenester Chad VanGaalen deserves credit for indulging the band’s avant impulses, such as the devolution of 'Upstairs' from a bright Sea and Cake-like ditty into the reedy feedback that helps usher in the discordant drone of 'January 8th'.

There’s a sense of awkwardness, of not quite fitting in, that permeates throughout Women’s music. The erratic nature of this album makes it a near perfect soundtrack for these troubled times, where no one is quite sure what awaits around the next corner. How apt that it was recorded long before the current economic crisis, and has sprung forth from a region of Canada known for its high-density oil fields. That heartsick sense of not knowing is the visceral thrill that Women thrives upon, and makes it an album of rare depth, with previously undiscovered compartments opening up with every listen.