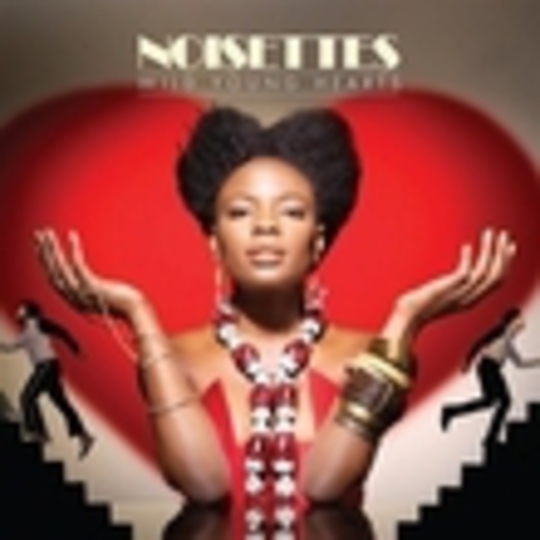 “Indie is boring, dead and over,” said Noisettes singer Shingai Shoniwa recently to the Guardian, and whatever your opinion, everyone should breathe a holy sigh of relief that she has hers. While much has been made of their leap from ‘indie’ to the charts, the truth is that the Noisettes were never much of an indie band. Their last album, What’s the Time Mr Wolf, was a semi-bizarre run-through of most of the major guitar genres, more notedly glam-rock, pub-rock, punk-rock and, er, Andrew Lloyd Webber, but not really indie. Still, they were touted as such, and marketed as such, and they would have faded into undeserved obscurity if they had remained that way. However, some brainiac has worked out that they were phenomenal musicians with a hell of a lead singer, and got them to write some songs that properly showcase their talents.

Wild Young Hearts is not a complicated piece of work, but it didn’t have to be. What it needed to be was a vessel through which the three of them could show off their musicianship, which was always the most remarkable thing about them. More importantly, it needed to be a means by which Shingai Shoniwa could open her mouth. Had things remained as they were, and they trundled along quietly in the back stable of some major label, it would have been a fucking tragedy. Shoniwa has all the makings of a female rock icon. She’s Debbie Harry in a cape; she’s Gwen Stefani with a warble; she’s Shirley Bassey with a flying V guitar, and, with all this banding about of the term ‘sell-out’, she’s the reason you can’t find it in yourself to begrudge them a single iota of success. There are some bands that make you think, some you like cause you relate to them, and then there are the ones that you look at and know, no matter what you think of the music, they deserve a lifetime on the stage.

In this case, the most likely thing you’ll think about the music is that it’s good. It’s a good example of a pop record, simply done and all the better for it, but it’s also quite moving, and, unlike the kind of album that someone like Britney makes, it lacks the presence of totally ambivalent fillers around the singles. Instead there are the upbeat radio ones, the upbeat album-y ones, and then some surprising little gems that throb quietly at the heart of the record. The first one of these is the opener 'Sometimes' which in the lyric of "sometimes we start over, and go solo", contains a universal pathos not heard since 'Eternal Flame' by the Bangles. Then there’s '24 Hours', a track largely ignored by most album reviews, but which, in the simple melancholy of its central hook (see title), should be taught in a class on songwriting. These songs positions as number one and number four on the album, also indicate that the band treat their introverted moments with as much importance as the potential hits.

But of course, on a record like this, you don’t overlook the rhythm. The Noisettes do rhythm exceptionally well. You will have heard, of course, the number 2 single, with its title that could have been chosen by a title-generating computer programme, and you may have found it strangely un-obnoxious. Well, the same goes for most of the big tracks on this record. Where a lesser band would have had you grinding your teeth at something as relentlessly upbeat as 'Saturday Night', the Noisettes have you both charmed and un-annoyed - maybe even impressed that they slipped in the word 'shenanigans’. Then there’s the sixties moments, about which there is absolutely no dilemma. 'Wild Young Hearts' and 'Never Forget You', in their full-bodied Phil Spector glory, are the crowning jewels of this album. Jubilant and anthemic, there’s even a hint of Mariah Carey’s 'All I Want for Christmas is You' in the closing minute of the former - a musical trigger that reminds you of all the great, unashamed pop songs you’ve ever enjoyed, and rockets the Noisettes, in their best moments, right up to their league.

The only non-straighforward thing about this album is the discrepancy between Shoniwa and her lyrics. Do we really believe that this impressive statue of a woman just broke up with her boyfriend, called in sick to work, and went out on the town like some North London student? Er, don’t pull the other one Shingai, I don’t want it to fall off. But here, maybe, is the solution to the mystery of the missing indie. Spruced up, sophisticated, and certified pop stars they may be, but the Noisettes have not completely put their past behind them. They retain their idiosyncrasies and their sense of history, and it’s these things that give this record an identity of its own, and make the Noisettes so very easy to love.