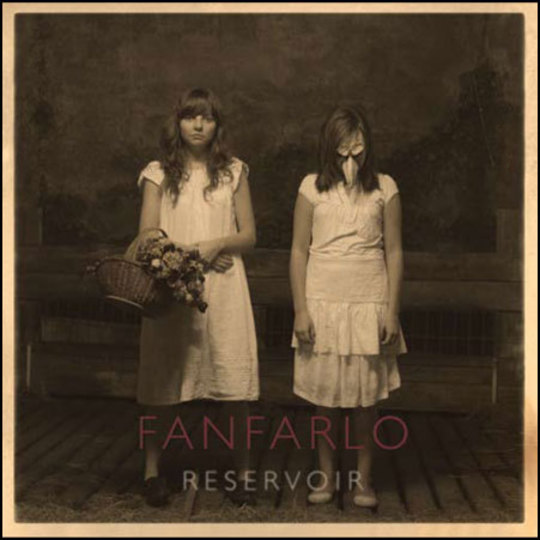 Any big Ed Harcourt fans out there? Anyone perturbed that Ed seemed to get it devastatingly, straightforwardly RIGHT with his “indie” album, Strangers shortly before deciding no-one was listening, and pretending to retire…?

Fanfarlo are similar fare, and that’s a perfectly fine thing to be. The band make pretty, guitar and organ-led indie, with discreet swirls, parps, and trills of brass and strings. In places, they bring out the wistful brass, singing saw, and woodwinds (e.g. at the coda to ‘Luna’ (track 3), or the intro to ‘Comets’ (track 4) which are two of the best moments here), but mostly adhere to well-constructed indie, such as ‘Ghosts’ (track 2), which has a ‘Lust for Life’ kick to it. That’s not to say they’re an inferior copy, just that Harcourt sometimes tried too hard to be a British balladeer in the mould of Tom Waits, and whilst Fanfarlo’s singer has an uncannily similar crown & drawl, the band pull him towards ensemble-playing, and anthemic writing.

Hmm. All these algebraic comparisons are an odd thing (X = Y minus Weirdness); fact is, though, as a mainstream music-consumer you might like this as much, if not more than Snow Patrol (who Fanfarlo have supported), even while you can say – quite objectively – that the arrangements lack the melodic surprises of Belle & Sebastian, or the epiphanous crescendos of Arcade Fire. For their arrangements, instrumentation, and dynamics, My Latest Novel could be Fanfarlo’s Scottish cousins, but Fanfarlo’s singer’s tone is that shade more attractive… or younger, more seductive. Your call.

You might have guessed by now that there’s not a huge amount to say about the lyrics. ‘Good Morning Midnight’ (track 11) takes its title from tragic drunk Jean Rhys, but the borrowing is just a prop, which makes me think someone needs to invent a journalistic catchphrase that can be thrown about like Shakespeare’s “All Sound and Fury, Signifying Nothing” – perhaps “All Slogans and Sighing, Signifying Nothing”? Consider these lines, from the album’s centrepiece: “the walls / the walls are coming down / the here and now is coming down / won’t someone let me down // the ships / the ships are coming in / the great ideas are wearing thin / and there is nothing left to do”. Oasis, it ain’t, but it falls short of making you want to buy their T-shirts and badges.

Hohum. I like this. It’s cheery. Who needs profundity, when you’ve got summer?