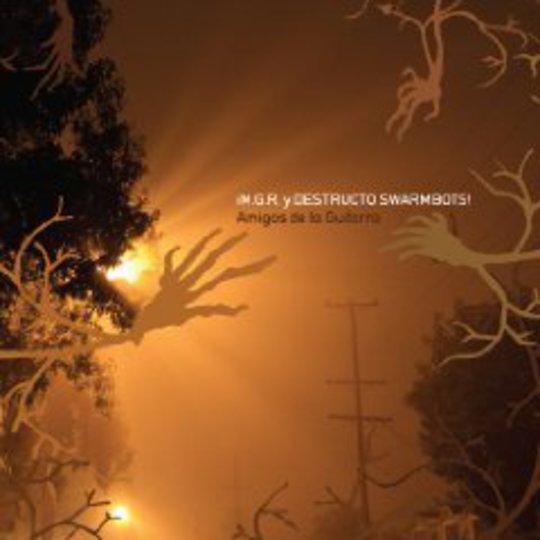 This is the crossover album non-metallers taken have been waiting for, that retains all the force and atmospherics of contemporary avant-metal, without the “Cthulhu Calling” roar of the vocals. The personnel are Mike Mare (Destructo) and Mike Gallagher from Isis (MGR). MGR y Destructo Swarmbots knocked out their debut in "a swampy rehearsal space in Queens NY", and then recorded and mixed it "in four days of chaos, heartbreak, kittens and flowers". That doesn’t sound like a long time, but it’s Gallagher’s second release outside Isis, and he’s been Aaron Turner’s righthand man in the finest IMM group for the best part of a decade.

For all the warning signs – a name that many rappers would wince at; a title that suggests an ill-judged excursion into mariachi music; a single track, 42-minutes long, called ‘Amor en el Aire’ – this is sterling stuff that could have been recorded any time since 1970, albeit by guitarists attuned to classical minimalism or the futurist ambitions of krautrock. Presumably, this duo don’t have an agenda to erase cultural history and the unnecessary ornamentation of blues / jazz / folk, but they do want a new way to “do dark”. As you’d expect, the overall mood is a terrible, timeless brooding, but without a trace of melodrama: in the first of three, roughly equal movements, we roll into a desert town with dust blurring the horizon; the ultra-slow progression seems familiar, almost formulaic (like Tarentel) but it’s just over the border from ambient’s wallpaper-if-you-want-it-to-be translucency. The middle movement is bridged by jackhammer pummelling that recalls Neu 75 (very specifically), whilst the album as a whole resembles the minimal guitar-work of Michael Rother generally (with Neu!, Harmonia, and solo). Whereas Isis (on Oceanic and elsewhere), use throbbing tremolo-bass to create depth and force and liquid motion, the delicate interaction of the guitars here is (as promised) much more aerial; fluid, almost weightless, but very dark. By the end, of course, nothing has happened. There is no apocalypse or climax, but just as Mogwai’s Zidane soundtrack revealed an ability to keep you listening without any explosions – acquired through years of playing slow-builds – this is similarly successful; a place of solitude and retreat that’s somehow purifying and calming, rather than compounding misery.