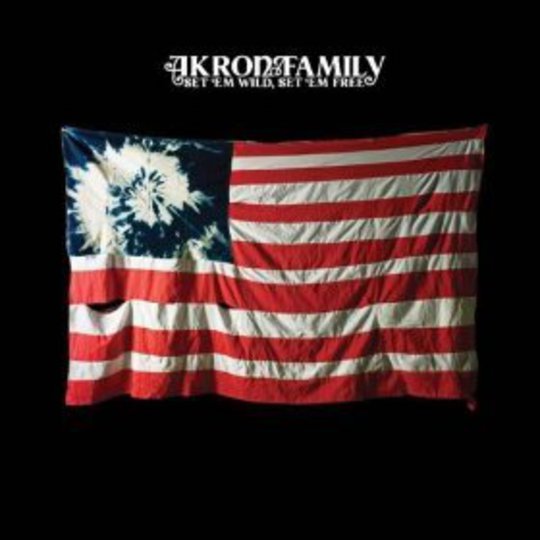 When they appeared on (or in parallel with) the “freak-folk” scene a few years back, Akron/Family seemed like unashamedly retro, flowers-in-their-beards kinds of fellows. The biggest surprise is that they’re now a trio – given the massive sound of many of the songs here, and superb ensemble-playing you’d think would take an entire Incredible String Band. That’s a fair reference point, because the arrangements dart between acoustic folk and 70s-style prog (when it still had one foot in the blues). There’s no mimsy here, though, and certainly none of the “listless strumming and a pump organ” approach to “folk” by many contemporary bands: the guitars have a Byrds-y fluidity, the time-changes are frequent, the percussion never lets this become background music, and the vocals often holler, rather than feigning delicacy with the default hush of ersatz-folk.

More than just a big sound, though, Akron/Family have become a band with a purpose. Mostly it’s the music itself that suggests a celebration of natural beauty in the face of destruction. Otherwise, there aren’t many lyrical clues to this renewed sense of purpose, saving the sleeve-quote (“last year was such a hard year / this year is gonna be ours”), from the sparse but redemptive gospel song closing the album (three-part harmonies, gathered around a piano). Meanwhile, nodding to Sly & the Family Stone’s There’s a Riot Going On, the cover-art displays an irony-free agenda to be iconic: an American flag with the stitching coming loose, and the stars (for individual states) replaced by a single swirl that might be (desperately retro) tie-dye, but looks a lot like a satellite photo of a cyclone, suggesting: whatever comes next, we’re all in it together.

On first listen – or, indeed within a few tracks – that dedication to purpose comes across. It’s a bold album, even in its prettiest, most pastoral moments. With a crop of bands – naming no (animal) names – being snapped up as “the next Fleet Foxes” on the basis of their harmonies and acoustic guitars, Akron/Family have been in the game much longer than most, and it could well be their time. The opening track ‘Everyone Is Guilty’ has at least six changes of tempo, including one wild and shouty section that screams Animal Collective, before hitting on a far more powerfully anthemic chorus, and then ending with a miniature guitar symphony, the desperate lead-guitar rallying some hope, or bewailing tragedy, even as the slower rhythm section enacts the mass grinding-down of the spirit. Obviously, if you’re going to re-tread the path of Yes and Amon Duul II, you’ve got to be really sure you going to match them at their best... ‘Creatures’ is undisputedly Animal Collective-like throughout, with its (possibly-programmed / possibly-just-really-tight) beats and handclaps. The similarity seems to be a natural consequence of shared influences, though, musical and metaphysical.

In places it’s sing-along (“you and me / and a flame makes three...”), in places it’s shout-along, and often in the same song. It’s an album of rivers and valleys, forests and cities, ‘The Alps and their Orange Evergreen’ (track 4), the ‘Warmth of the Sunshine’ (track 7) and (in best psychedelic fashion) the ‘Gravelly Mountains of the Moon’ – at 7 minutes and 41 seconds, the mid-album excursion into noise could have been awful if it adhered to leaden blues progressions; as it happens it works as a backing to the yelps about obliterating the Ego. For anyone (or everyone?) baffled by Animal Collective’s dive into electronica, or finding Fleet Foxes too mannered, this is one way of getting back to nature that certainly isn’t a weekend retreat.