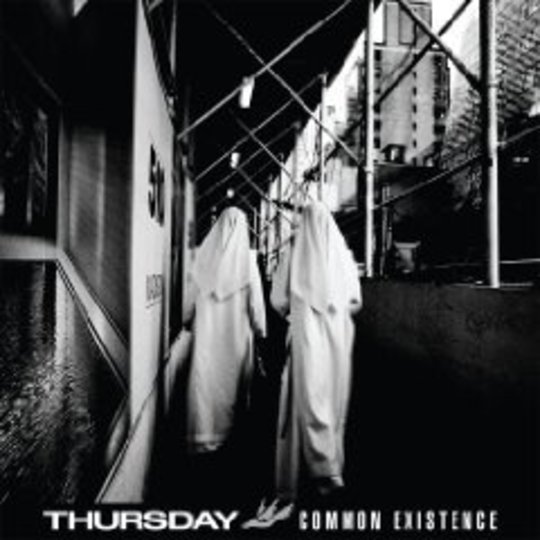 The fifth album from New Jersey post-hardcore/emo champions Thursday sees them once more pair up with producer Dave Fridmann, offering a bruising, nuanced set where Geoff Rickly’s poetic leanings are offset by humongous riffs and occasional exercises in brooding ambience. Dedicated (among others) to the memory of US literature wunderkind David Foster Wallace and featuring a poem in the liners by esteemed Chilean author Roberto Bolaño (author of the horrific and ceaselessly compelling fact-based 2666, where “the secret of the world” might be hidden in the hundreds of brutal killings of young women taking place in an endemically violent Mexican border city), it sees the group address struggles universal in their themes. Rickly relays his tricksy verse with all the fervent ardour of a man wrongly condemned, while its artwork is a stark assemblage of black-and-white photography. If 2003’s War All The Time was a call, he suggests, this is its all-encompassing response.

It’s not, as you might have surmised, particularly light in tone. This is not a bad thing. Take Full Collapse (2001) – the band’s breakthrough album, and perhaps the high watermark against which they’ll be forever judged. Eminently listenable and thoroughly addictive, its tales of summers past and misty-eyed nostalgia were shot through with thematic concerns involving car crashes, apocalyptic visions of burned cities and, in the album’s coruscating centrepiece, the perceived inevitability of a nation doomed to relive histories’ worth of conflict. That it was all these things – as well as conversely being a great driving record – points towards the band’s capacity to engage and delight without weighing down their appeal in heady rhetoric. Although Common Existence might not straddle this divide quite as successfully as that earlier effort, it’s evident from the off that said enviable ability remains.

A short drum fill opens the squalling, ferocious first track ‘Resuscitation Of A Dead Man’, which comes over almost a composite of everything that sees Thursday held in such reverence by some circles. Lurching, muscular bass underpins the battering-ram sonic assault gifted us. Closer lyrical inspection yields the notion that the “resuscitation” Rickly dwells on could be viewed a baptism, or significant rebirth of sorts – an allegory for where he feels his country might currently be standing, maybe? While we're at it, could any other band could get away with positing the suggestion “love is a fragile thing” while making such a racket? Indulging these whims even further, you could substitute ‘resuscitation’ with ‘resurrection’ and be looking at a contemporary re-imagining of a certain Biblical staple.

Or, quite simply, you could not. Elaborating on an earlier point, then: as ambitious as this band are, they never forget to bring the rock. Check out the insistent, pummelling hooks of ‘Friends In The Armed Forces’ – not a million miles away from the melody-strewn sensibilities of Rival Schools (significantly angrier, perhaps), it fittingly features that band’s Walter Schriefels on backing vocals. Thankfully, however, the album’s mid-point finds the band ease back some into a spectral, synth/acoustic guitar-heavy lament concerned with all things reversal – whether it be tears returning to the ducts from whence they came or rain bound back towards the ether, ‘Time’s Arrow’ is baffling, immersive stuff, the instrumentation even following these lyrical cues – turning upon itself halfway through, snaking back along that path before reaching an elegiac denouement.

This laudable aspiration unfortunately brings about the central flaw of the album, perhaps best exemplified by the sprawling flurry of ideas that make up ‘Circuits Of Fever’. Regrettable effects lace themselves around Rickly’s vocal, one riff leaping listlessly to the next, pausing only to let flourishes of synth and an incongruous wordless warble add to the melange. It’s something that could have been deliciously affecting were it handled differently, but falls oddly flat here. Similarly, their willingness to engage in all things heavy – I’m talking thematically, musically, technically – strays almost knowingly towards the belaboured at times, heavy doses of melodrama becoming tiresome. There’s certainly nothing present as satisfyingly crisp or straightforward as ‘Standing On The Edge Of Summer’, for example.

Generally, though, its makers can count Common Existence a triumph. Its closing salvo finds ‘Love Has Led Us Astray’ spreading itself over a deep, spacious melancholy, while ‘You Were The Cancer’ tumbles from the speakers in a fizzling burst of seethingly righteous, nothing-held-back energy. Overwrought, histrionic? Maybe. Well, yes: definitely. But when a band is capable of a conviction this dazzlingly, wonderfully trenchant, such criticisms really do seem extraneous.