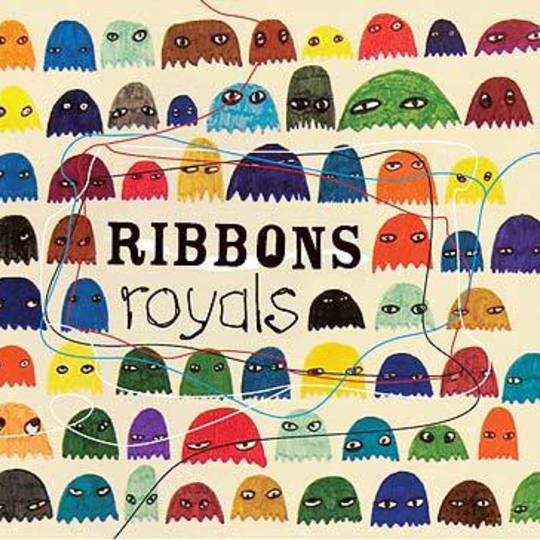 Ever since the studio became the 5th instrument for the 4-piece rock band, the history of electric & electronic music has been peppered with fine solo records by producers. Judged by different standards to their collaborators or parent-bands, we don’t begrudge Brian Eno or Van Dyke Parks their weirdest albums, and sometimes the lack of pressure leads them to truly extraordinary places. Jherek Bischoff AKA Ribbons doesn’t have a huge portfolio, but he was Jamie Stewart’s main collaborator on his best record - Xiu Xiu’s Fabulous Muscles.

After a drifting opener, it’s hard not to think of Placebo on ‘The Least and Least Likely’; partly for the vocal delivery, and the use of “Siamese” as a simile for bodies coupling, but more importantly for the immediate pop appeal. Okay, a comparison to Placebo may not endear you, but Ribbons easily match The Knife for their mix of sinister pop songs and fragmented evocations of the cold lands to the north, where you can still believe the folktales. With its android-choral singing, Track 3’s sci-fi lullaby resembles the Bladerunner soundtrack by Vangelis; you might think early-Eurhythmics, too, but only at their best. ‘Children’s Song’ adapts its vocal melody from ‘Ring-a-ring-a-roses’, but it’s borne on a captivating synth-bass arpeggio, and there’s a blistering barrage of distorted guitars at the end, worthy of Sunset Rubdown or Wolf Parade. ‘Automatism’ re-visits the alien world of Track 3 with its wordless harmonies and shimmering synth-string parts, gliding over plains of snow. Halfway through, these fade, and the POV dives into a more spacious ambience, with pizzicato notes and a descending bass-line describing a subterranean cavern.

After a few tracks that are poppy and proggy (sometimes within the same track), Ribbons are getting progressively harder to characterise, except with reference to Xiu Xiu – a fact acknowledged by Track 6 (‘Miu Miu’). Yep, it does sound like a kittenish Xiu Xiu, which is no bad thing – few singers can match Jamie’s rage and occasional hysteria, but Jherek can pull off the same tenderness. Think also, Rachel’s [sic] on The Sea and Bells, re-creating the horror of a clipper-ship lost in sea-fog, although the melodies that drift through even the most ambient passages of this album are more alluring. ‘Tongue-Tied’ could be one of the Xiu Xiu tracks where Jamie steps back to let (Jherek-replacement) Caralee McElroy take the lead, and with only a drone uniting its many movements, fluctuates between ambient and pholk, as acoustic guitar riffs and lurching string parts are added and subtracted. ‘Silver Locket’ recalls Syd Barrett’s setting of ‘Golden Hair’ (by James Joyce), and shows Jherek capable of conveying otherworldly preciousness with simpler instrumentation. Finally, ‘All I Was’ continues this trend toward acoustic “chamber-folk” simplicity, but in its second movement adds a synth or processed vocal that basically quack-quack-qua-quack-quacks, as if a robot rubber duck has just drifted up to the ethereal Raphaelite lady bathing, and then is followed by a chorus of whistles (wood-sprites watching from behind trees?), before the song – and album – ends with more elegant strings.

So – an essential purchase for Xiu Xiu aficionados; that goes without saying. If Ribbons are Xiu Xiu without the politically-fuelled rage (or despair), the same could be said of Thom Yorke on The Eraser, and it’s hardly a bad thing to say that this sounds like all the best experiments found across Radiohead EPs (we’re talking Radiohead, here). Obvious comparisons aside, this also stands up favourably against Aphex Twin’s most ambitious album, Drukqs where fragile piano-playing, after Erik Satie, alternates and sometimes fuses with electronica ranging. Both the weirdness and the musicianship are present, with the obvious advantage that it’s one-third as long, and has (admittedly cryptic) lyrics to cue your imagining of alien cities on dead-worlds. It’ll be interesting to see what Jherek does next – whether he returns to put the Eno in Xiu Xiu for their long-awaited masterpiece, whether he accentuates his own song-writing, or fires out perverse missives at a rapid rate (as Jamie does) with little regard for compromise. Frankly, any of those will do.

It's Midnight In Honolulu