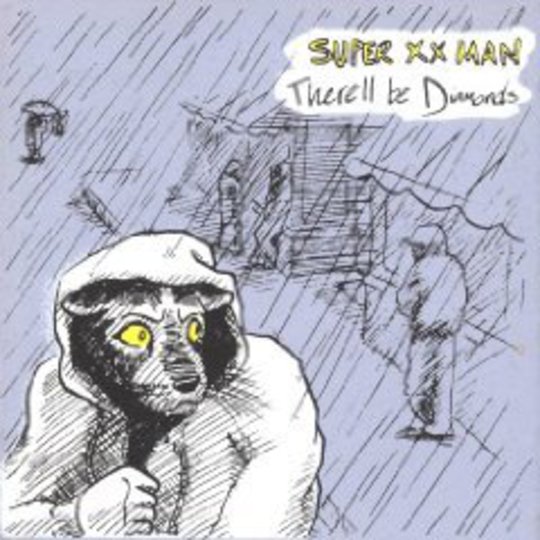 How do you feel about music by severely mentally ill people? No, really – I’m genuinely curious, and opening this up for discussion / recommendations / whatever; personally, I don’t think there’s intrinsic added value, and the pros (catharsis; therapy; raising issues, or at least “voicing” a muted group) tend to counter-balance the cons (a lack of musicality, often; a lack of depth to said “issues”; a sense of exploitation or voyeurism, maybe). That’s to say, it doesn’t seem negligent or timid to end up just-not-listening to any more than a few tracks by Daniel Johnson, or anyone on Songs in the Key of Z.

Super XX Man actually works in a psychiatric institution, and this happens to be very important to what he writes, hence why the first three songs on his twelfth album are entitled ‘Medication’, ‘Psychotic Break’, and ‘Crazy People’. The foregoing discussion is relevant, because his music recalls plenty of familiar figures from the canons of Outsider Music, or Lo-Fi by functional people who nonetheless sound like they’ve been close to the edge: Jad Fair, John Darnielle; maybe a less-produced Mark Everett or Jason Lytle. Super XX Man – but let’s call him Scott – inadvertently raises the question of what we can learn from supposedly “authentic” Outsider Music, because he isn’t restricted to performing his own OCD or Bipolar I (say). One song appropriates “rubber duckie, you’re the one / you make bath-time lot’s of fun”, and changes it in the second verse to “medication, you’re the one / you make my life-time lots of fun”. Cute, and appropriate (look up Kay Redfield Jamieson, on the way depression makes you regress), but it’s not a trick he over-uses, thankfully. The second track (‘Psychotic Break’) is prime Galaxie 500, bringing in the reverb to cast a glow over the imagery, whilst the lyrical premise suggests that the song could have been expanded into something like ‘Names’ by Cat Power, in which she goes through the casualties in her own life.

We could play the sounds-like game track-by-track, but suffice it to say – anyone Scott resembles at any given moment he can usually equal, and his voice (closest to FM Cornog, AKA East River Pipe) is far less grating than Jad, John, Jason. Half the time, mental illness isn’t mentioned but, after that opening triad, it always frames the quiet epiphanies. For one, ‘Downtown Chapel’ is – quite simply – the most heart-breakingly beautiful lo-fi song I’ve heard all year, when most of what Scott does is gently intone “The downtown chapel is mine / the downtown chapel is mine / the downtown chap-el… is my everything”. It’s his sanctuary, but it’s also a part of him, and every part “is” him, as he enumerates them in the lyrics. The last part of the song is a kind of improvised prayer, and as you listen, you find yourself wishing good things for the singer, or anyone like the narrator: that he gets married in that chapel, maybe, or it remains “his” for a long time, if it’s the best or only family he ever has. Listening to this on shuffle, a lump went straight to my throat, and stayed there all through a repeat of “rubber duckie, you’re the one…”

There are other great – no, gorgeous – moments on almost every track. ‘Crazy People’ should be a manifesto or anthem for Mad-Pride; it’s catchy and jubilant right through, also like Galaxie 500, and asserts that “they get – more from life than me”, but even the lighter numbers will be lifted by a harmony, somewhere. The closing track is basically The Mountain Goats play ‘Then he Kissed Me’ – how great is that? The album-title and title-track (‘There’ll be Diamonds’) makes me wonder if Scott’s heard Jandek (especially ‘Nancy Sings’ AKA ‘Birthday’ – one of the finest songs ever written, also on a Rough Trade compilation), which tells you that whatever you lack (be it a job, a partner, stability; all the lacks of mental illness) you always have the rain, and sometimes it rains diamonds, and in those odd moments of bipolar disorder’s euphoria “the rain will come / to kiss your hair”. Anyhow. This is a definite 8/10, and it’s tempting to add on a bonus point for the hand-printed packaging. It may not be as “edgy” or “adventurous” as Scott thinks, but I can see this meaning a lot to a lot of people, and whether you have right now, or have had someone with mental illness in your life, we all need those insights into what you’ve got left when you’ve got nothing.

Be True to Your School