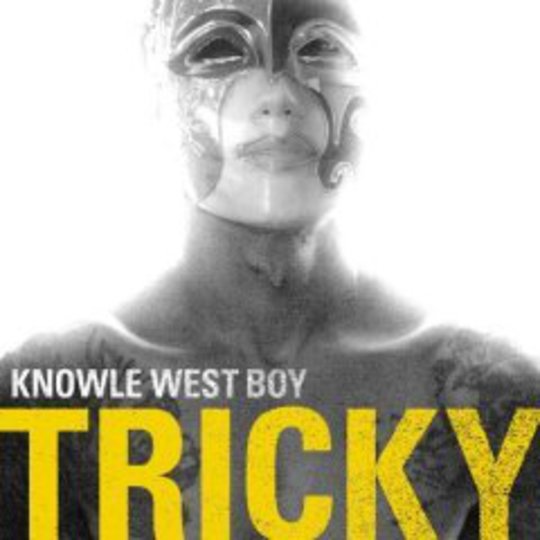 Tricky – born Adrian Thaws in Knowle West, Bristol, and once partial to suffixing his music-making moniker of choice with a ‘Kid’ – turned 40 in January this year. When he was 27 his debut album, Maxinquaye, landed in critical laps and proceeded to attract praise like a magnet. The intervening 13 years have seen him attempt to match the might of his first long-player several times, this the latest in a series of fall-shorts. And while sold to writers as his strongest since 1995’s solo breakthrough, Knowle West Boy is another shadow of something truly magnificent.

It can’t be easy being Tricky, knowing that every record you release will immediately be measured against a debut produced at a time when fewer eyes were on his movements, when trip-hop was a sub-genre at the cutting edge, not a maligned categorisation for coffee-table dross by the likes of Morcheeba and Moloko. He moved away to the States to find a creative freedom he couldn’t explore in the high-pressure environment of the British music scene (and will soon, albeit temporarily, lay his hat in Paris), and while this record is rooted in his upbringing – the title is the only clue you need to work this out – it’s as informed by successful stateside acts present as it is the menacing atmospherics of the best of his own catalogue. Deny it all you like, hardcore fans, but here be traces of the commercial hip-hop of Black Eyed Peas, of the pop slickness of Justin Timberlake, of the jazzy swing of Alicia Keys. It’s a record where Tricky’s unique character only rarely shines through the fog of diversity that clouds Knowle West Boy’s potency.

‘Puppy Toy’ is a slight, breezy opener that will blindside anyone genuinely expecting an echo of Maxinquaye’s headiness. Our protagonist jousts with an unknown female vocalist, but there’s little drama – the episode plays out like an am-dram kitchen sinker. ‘Bacative’ lays on the gloom a lot thicker, but still pales when placed beside this man’s most impressive manifestations of aural oppression, when his music alone – a few simple beats and a string sample – could set the hairs on the back of your neck not just erect but ablaze. ‘C’mon Baby’ finds Tricky playing Nick Cave in Grinderman mode, all thrusting crotch and sleazy riff, but the overall product is more Match of the Day montage – a Goal of the Month phone-in – than Hammersmith-filling sweat-bleeder.

The album’s lead single ‘Council Estate’ sells the listener a great Dummy by crackling into life with a buzz reminiscent of Portishead’s ‘Roads’, before splitting into a swaggering and raspy number that could pass as a Primal Scream cut if you substituted Thaws’ spitting for Bobby Gillespie’s slurring. It clatters and stomps for almost three minutes, but a rampant bassline can’t dig deep enough to enable the song to truly stick in the grey matter. Better is ‘Past Mistake’, which sees smoke descend and our guide get lost in a tunnel with no end, only blindness washing over the senses. It’s a woozy rush, and the one song here that does make the ears properly prick up: this is what we remember, this is why Tricky was so very loved by so many when Bristol briefly became the epicentre of everything brilliant about British pop.

Not a lot else truly impresses. A questionable cover of Kylie Minogue’s ‘Slow’ is an interesting curio, albeit not in the same league as his Nearly God take on The Banshees’ ‘Tattoo’ – now that was a very characteristic re-working – and ‘School Gates’ resonates with an alt-country ache that’s unexpectedly affecting. But there’s not enough bite to this collection for it to be rated as highly as Maxinquaye, or his second LP Pre-Millennium Tension.

It’s as accessible as his debut, that much is true – Tricky’s welcomed the pop infection that’s spread through his system since the bleak Angels With Dirty Faces – but it lacks a standout single voice. There’s too much hubbub, too much chatter for the album’s pilot to properly make his mark. There is a real lack of quality individualism - it might not be easy being him, but more of him would have made this a much better record. The many guest turns, often from unrecognised talents that even Tricky has forgotten, give Knowle West Boy plenty of colour, but it’s lacking a depth worth exploring in earnest.

And besides, who really wants a colourful Tricky record? Several shades of black seemed to fit best in the past, and so it may be again in the future if the Bristolian builds upon the best elements of this record for his next release.