When Life Gives You Lemons You Paint That Shit Gold 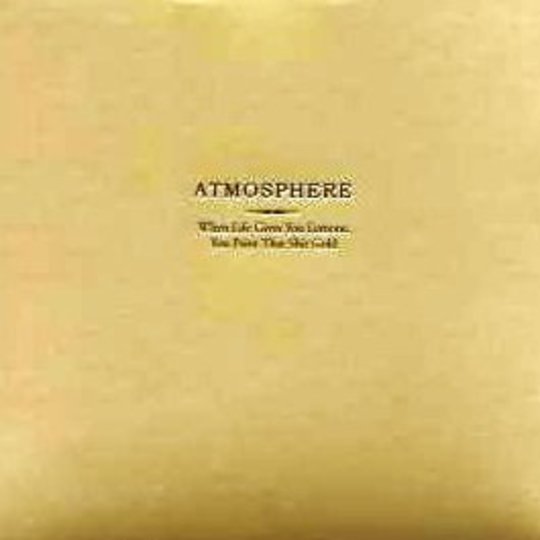 It don’t describe what just occurred,

Looking at a phone of missed calls,

Probably all the people that you pissed off…”_

As peer-level artists are losing their heads to paranoia and politics – check out recent LPs from El-P and Sole – Atmosphere’s Slug keeps it properly real by delivering rhymes firmly rooted in the grim reality of the everyday. Throughout When Life Gives You Lemons You Paint The Shit Gold the never-hurried emcee flows smoothly on topics unsavoury – drink, drugs, prostitution – but never takes a flight of fancy to illustrate his points in a brighter light. As the opening quote, from ‘Your Glass House’, suggests, this is the mundane set to arrangements that, while perhaps not bracing enough for some, balance swagger with silkiness.

But this is old news to anyone who counts an Atmosphere record among their collection, and with plenty to choose from it seems likely the majority of readers clicking to this article will have previous with the Minneapolis duo (latecomers, catch up: Slug is backed by DJ/producer Ant). When Life… is the pair’s sixth studio LP proper, but between then – then being their formation in ’93 – and now they’ve also issued a series of EPs and singles, as well as a couple of compilation releases. Productive like so few, Atmosphere’s quality control is also fairly admirable: their Sad Clown five-trackers haven’t always been worthwhile purchases (although if you can, pick up Bad Summer 9 before the sunshine does make its presence felt this year – it’s perfect for lazy outside socialising), but to produce such a sizeable catalogue is impressive going. If this is your first taste, and you like it, there’s so much more to enjoy.

But to focus on the release at hand: When Life… is an easy-going listen if you let it be, rarely getting the pulse quickening; but slide deeper into Slug’s drawled recallings of situations turned sour and it takes a turn for the sinister. ‘The Skinny’ visits the turf of a pimp and those who work beneath him – “Your lips taste like his dick” – while the throbbing bass of ‘Shoulda Known’ carries a tale of an inadvisable liaison, where lust crushes the voice of common sense. It’s a good few side-steps from Slug and Ant essentially updating Jazzy Jeff and the Fresh Prince this time last year, on the aforementioned Bad Summer 9. ‘Can’t Break’ ups the menace, but around these slices of creeping threat are spring-fresh uplifters, guaranteed to lighten any melancholic mood.

Closer ‘In Her Music Box’ twirls like a ballerina in such a knickknack, bringing an LP of ups and downs – always closer to the dirt than the stars – to a purposely subdued, blissfully serene finish. Looking over what’s passed, little sticks first time out, but that’s almost the beauty of Atmosphere: these aren’t grunts of braggadocio, they’re rhymes of reality, as beautifully personal and occasionally humdrum as it is. While other hip-hoppers produce synapse-popping pieces of sci-fi battle-beat architecture, Atmosphere play an autobiographical angle affectingly well. It’s an approach that’ll lead some to conclude When Life… is a little on the dull side, but with six albums under their belt seems the duo’s formula is not about to let them down just yet.