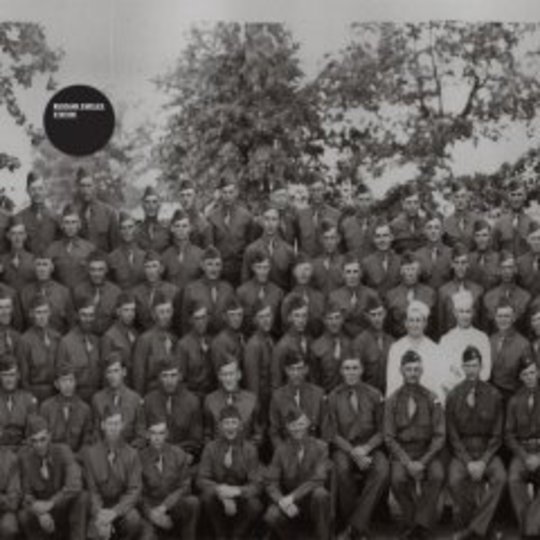 Recorded without bassist Colin DeKupier on board following his departure from the band after completing touring for their 2006 debut Enter, you’d be forgiven for assuming that Station, Chicago instrumental outfit Russian Circles’ second LP, might lack a certain punch, a low-end balance to counter the astounding percussion on display and the band’s frenzied guitar lines. But while this record does lack some of the immediacy of its predecessor, stand-in four-stringer Brian Cook – of These Arms Are Snakes – admirably steps up to attempt to counter the furious bluster concocted by sticksman Dave Turncratz and guitarist Mike Sullivan.

Perhaps penned with the thought in mind that some nights they may not be able to perform as a trio, these six songs drift in and out of bombast, the neat dividing lines of their acclaimed debut – read the DiS review here – blurred so that never is a join telegraphed ahead of a pedal-down eruption of sound; they don’t hit as hard, as fast, as those that made Enter the stunning experience that it was, but emerge over time to be far more impressive of arrangement, of technical execution and repeat-play depth. ‘Verses’ is a masterclass of tonal sculpting, Sullivan wrestling the most divine drones from his instrument before stepping back from the beauteous creation he’s pieced together to bludgeon it into splinters at the six-minute mark; equally breathtaking is ‘Youngblood’, which sounds like its reached its final, perfect fade into oblivion right before Hell itself rejects the song, spitting fiery brimstone all over the shop like a Roman Candle the size of the Gherkin.

These moments and more: grab you by the waist, haul you up from your seat, force you to offer respect, demand you bang your head ‘til your neck aches so bad no icepack could ever be big enough, and ultimately destroy more of those tiny, sensitive hairs that line your ears than any other instrumental act around. Near enough. The exceptions, well, they’re not making music this brilliantly, meticulously assembled right now.

Like most instrumental acts – scratch that, most bands in general – there is a very definite formula at work; it’s hardly verse-chorus-verse given the act in question, but guidelines are well adhered to, and deviations aren’t encountered just because. There’s a rhyme and reason to every nuance, with no tangent allowed to branch without careful analysis of where it may lead. So, ‘Xavii’ sticks to its gorgeous course for just long enough before taking a turn for the sinister; ‘Harper Lewis’ plays terror tricks on the mind – where shadows move and creeps crawl across your skin – until the absolute right moment to begin a macabre grind. Everything’s weighted just right, DeKupier’s more driving basslines not necessary missed in the grand scheme of Station.

It’s not their high watermark, of that you can be sure – Russian Circles’ development from album one to two wasn’t without beyond-their-control factors muddling the mix, so you leave this record confident that, when they hit their perfect, natural stride, album three is going to be a legendary release. These wandering riffs, devastating drum rolls and rollicking motifs will stick with you, but primarily to serve as an appetite-whetting taste of where their makers may venture next.