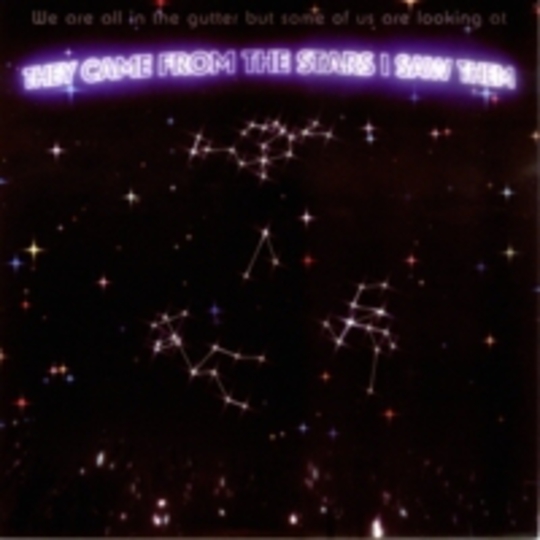 They Came From The Stars I Saw Them aren’t ones to be held back by conventional approaches to music. They sound like they’ve been handed their instruments as some kind of distraction, in the same way that a babysitter might give a hyperactive toddler a toy, such is the attention span of We Are All In The Gutter But Some Of Us Are Looking At They Came From The Stars I Saw Them, or lack thereof, as it scuttles its way across nine tracks of disco-synth-electro-prog-jazz-pop.

If you’re trying to imagine what that sounds like if you’ve not heard this troupe before, perhaps it’s best you stop before the fever sets in. Even when you have heard this band, what they’re about doesn’t get much clearer; at any one point during the album you’re as likely to be listening to ‘Rock Lobster’ gone nu-rave-wrong (‘The Hot Inc’), an almost constantly out-of-tune saxophone or just a series of disjointed random noises for eleven minutes (‘Tiggy Off The Ground’).

In short, it’s a mess. The musical equivalent of a stream-of-consciousness amateur dramatics play where the emphasis is on twists and turns without being trapped by the confines of having to make sense, jumping from scene to scene with various twists and little direction. As you’d expect, it’s a largely untidy amalgamation of sounds, the strong rhythm section acting as an anchor whilst the various tripping synth-noise has free licence to do whatever it likes, the sporadic sax playing at being co-pilot to the vocals which themselves are forever destined to split the listening audience in two with the soft thwup of an axe tip driven into soggy wood.

The colloquial, sometimes nonsensical, lyrics are chanted in unison rather than sung, the band connected no doubt by some advanced robotic space membrane which makes them switch between Klaxons’ falsetto and that wail crazy-eyed cult worshippers use when they’re talking about ascension. Yet within this space invasion, disguised by this discordance, are hidden little flourishes of competence; the electro-disco of ‘(Down On The Dancefloor) Let’s Make Something R.E.A.L’, or maybe the opening passage of seven-minute, multi-act opus ‘It’s Time’ sporting five beats to the bar, until the vocals arrive with a four-beat rhythm, the whole thing clashes nastily and then that saxophone comes back in and everything goes to shit. Again.

Come the conclusion we’re faced with a difficult decision: is this album good because of its constant quest for fun, or does it engineer its own downfall by hiding its few clever touches behind some hyperactive star-jumping and far-out lyrics? Personally speaking, part of me wants to salute this album, this band, to applaud them for their flouting of the idea that music has to be in-tune, neatly-executed, to have at least two choruses per song and be about things that make sense. But the other part of me is so busy shivering from the chills sent running down my spine every time the vocals clash into each other or spiral out of tune that after a while it becomes an impossible task. Nice title though.