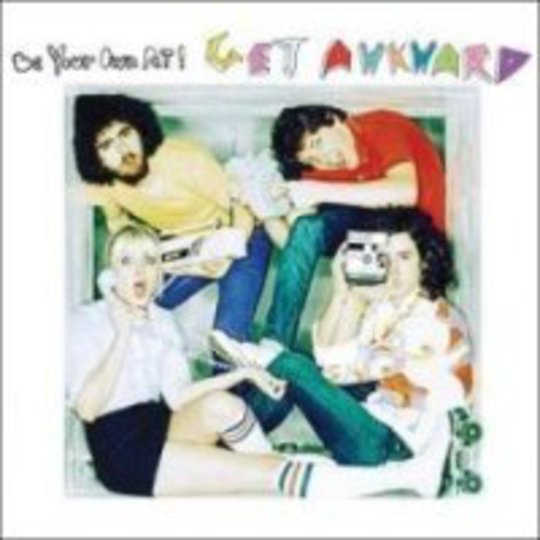 Kidz are so gr8, aren’t they? With their cheezy Wotsits and their totally rad tunes and their grazed knees and their making out with hot guys and... oh shut the fuck up yeah?

Nashville foursome Be Your Own PET first surfed into view three years ago, riding a frankly inexplicable wave of goodwill possibly prompted by Thurston Moore’s decision to release their self-titled debut through his Ecstatic Peace label.

Now they’re back, back, back (repetition absolutely necessary) with a second dose of barely-pubesced raucousness and, a mere two spins down the line, DiS is seriously reconsidering the prospect of having children, like, ever.

In fairness, at least BYOP have the courage to call adolescence out for the clueless fumble it really is, rather than attempt to channel it into lofty pretension or gormless angst. But equally this makes for an experience largely devoid of danger or genuine thrills.

Oh sure, they say ‘fuck’ a bit and they talk about popping pills but really Get Awkward hasn’t the foggiest what to do with its hard-on, preferring instead to launch zestily into pillow fights and pizza parties with giddy abandon; a record that doesn’t so much have spunk as buckets and buckets of gunge; the kind TV’s Dave Benson-Phillips used to splash liberally over childrens’ heads in antic fashion.

Equally, the band channel some terrific influences – The Stooges on ‘_ Black Hole’, The Ramones on ‘Heart Throb_’ – but couple them with a yammering insistence that’ll drain the will to live right outta you.

Highlights? Well ‘You’re A Waste’ sounds, improbably enough, like The Cardigans. And ‘Super Soaked’ is admittedly an excellent opener; a spastic tantrum that resembles Enon spitting the dummy out the pram.

Weirdly, Jemina Pearl’s lyrics provide an eloquent meta-critique of the record’s tail-chasing absurdity, spitting lines like "eating pizza is really great / so is destroying everything that you hate" or, hilariously, "stuff is going everywhere / I’m doing stuff but I don’t care" with eerie prescience._

So where do Be Your Own PET go from here? Personally I’d like to see them regress with every album, getting increasingly shrill and annoying ‘til round about album six, when they’ll start screeching about hanging out in their moms’ wombs, toking on the umbilical cord and kicking out a few gnarly beats on the amniotic lining. Then I might consider paying the entrance fee.