We Have You Surrounded 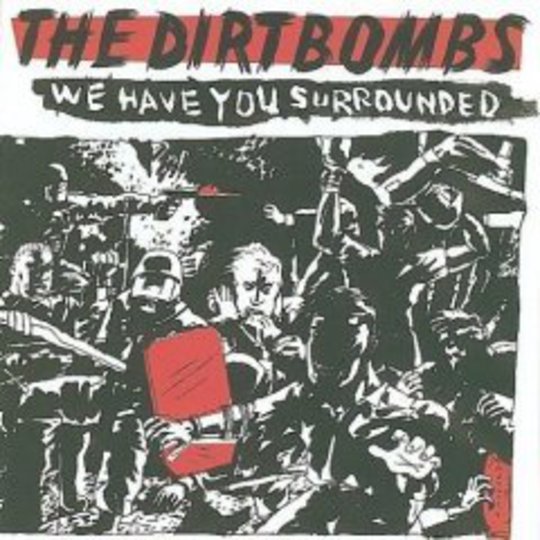 It’s hard to know how to approach Detroit’s The Dirtbombs. On the one hand they’re the perennial underachievers who continue to eke out an existence when so many of their fuzzed-up peers have gone onto vast critical and commercial success but, as typified by the first half of We Have You Surrounded, they’re also more than willing to take the piss a bit, more often than not in an incredibly infuriating fashion. It’s like they’re being wilfully oblique, almost as a challenge that you should like their band – which is a fucking pointless thing to do, because it basically undoes all their good work, of which there is a considerable amount.

First, the bad. ‘Indivisible’ is a god-awful attempt at humorous cod-whiteboy funk, complete with a half-sung bassline and the most annoyingly repetitive vocal lines outside of your younger brother’s The View tribute band. The guitars are made so distorted and indistinct that they just blur into one gloopy mess and, compared to a band like Times New Viking (whose recorded-in-a-shoebox sound is all part of their charm), The Dirtbombs merely sound like they’re paddling frantically after a ship that sailed long ago without them. ‘Wreck My Flow’ is the song your middle-aged dad would write if you sat him down with an Jurassic 5 album and a Telecaster and told him to make something out of the two – any song where the main hook is based around the hideously clunky line “Everybody tryin’ ta wreck my flow” delivered in a horribly stilted, staccato manner is always going to run the risk of being utterly disposable. Their cover of Sparks’ ‘Sherlock Holmes’ isn’t much better, but that’s arguably because they play it fairly straight, or at least as straight as it’s possible to be when you’re covering the Mael brothers. And I haven’t even mentioned ‘Pretty Princess Day’ or ‘La Fin Du Monde’, which both sound like they were recorded as an afterthought, with half a riff between them and all the energy and verve of a bit of moss.

Which makes the fact that the mid-album brace of ‘I Hear The Sirens’ and ‘They Have Us Surrounded’ are both highly competent garage stompers where the band somehow works out how to write a half-decent song rather than phoning in a poor copy of their back catalogue. On the aforementioned songs the dirty guitars swirl menacingly above the relentless, thudding drums instead of being locked into the same dull groove, and the end result is that they become pureblood rock ’n’ roll songs constructed without attempting to be as difficult as possible. But then the eight-minute noisefest of ‘Race To The Bottom’ spoils their effect – it’s just a self-indulgent interlude of various pedals being pushed and stupid noises being fed through the monitors that could have been created by letting a hyperactive child fuck about with Glenn Branca’s gear collection.

With The Dirtbombs obviously trying so hard to prove how outré they are and essentially daring you to give a fuck, it seems they forgot to try and be lovable. Regardless of how many scenes they deny membership of, the sad fact remains that they do fit into a particular genre yet in trying to persuade listeners that they’re not a garage rock band they’ve merely become a very, very bad garage rock band