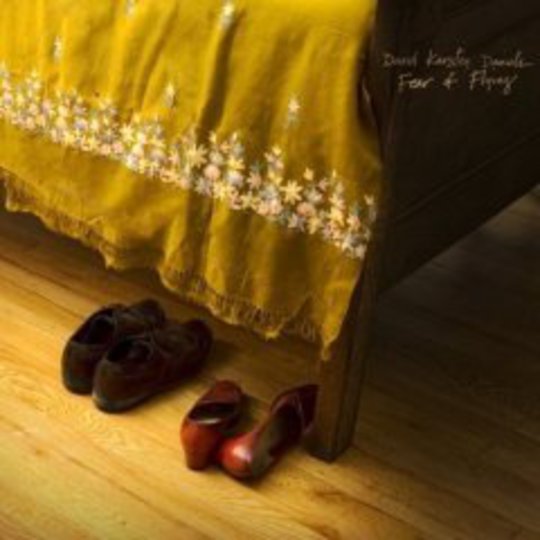 From its first note, David Karsten Daniels' latest full-length oozes poise and beauty. Such general terms seem hackneyed but, with Fear Of Flying, the right adjectives are immensely difficult to pluck and place. Indeed, that maxim can be applied to the man's entire career. Apparently he is a studied composer, a learned musician and everything that the spontaneous and emotional pop writer shouldn't like that much. Where's the spontaneity? Why doesn't he throw his guitar at rivals' faces? What's he doing trying to 'folk up' on this record? Interesting questions. But, as those in the know can attest, pop composers (one of the most loaded terms in music today) with the right balance of theory and horrific experience can become the most scintillating performers we have today – Daniels undoubtedly embodies this.

The first note, then. It's a poppy slur into a more important note, but its arrival is so delicately placed in front of you that you'd assume that the rest of the song probably couldn't match it. Happily, it does. 'Wheelchairs' is just about everything modern country music could be. The worthy emotion and difficult subject matter, told more beautifully than most, played with such studied emotional impact and precision of expression. The emphasised harmonies on words like "mother's… mother's… mother's" and "father's… father's… father's" are, again, beautifully judged and perfectly accompanied by Daniels' soft and unobtrusive acoustic guitar, as well as the softer-still splash of organ chords whirring underneath. This, along with Frightened Rabbit's 'The Modern Leper', is front-runner for opening track of the year. Maybe Fat Cat Records is about to have a perfect year.

When he ponders, which is musically very little and thematically very often, Daniels leads us on paths of intrigue previously the preserve of Jeff Mangum (though comparisons are begrudging and slightly redundant here). Religion plays a significant role. A childhood of singing hymns of devotion in Seattle surely allows him the brazen reactionary confidence and scattershot hysteria that appears in 'Oh, Heaven Isn't Real', and then the reverence and respect for the musical merits of religious practice to finish his album with an 'Evensong' and an almost-excruciating "Amen". It's a conflict that runs rather deeply, and one that is buoyed by the instrumental conflicts that illuminate just as much as they intrigue. The delirious oboe chorus on 'A Myoclonic Jerk', the following scuzz-bomb of a guitar attack, the honking horn section on 'That Knot Unties?', the sliding escalation and sudden stop of 'In My Child Mind You Were A Lion'… it's all indicative of a sublime musical mind.

The closing 'Evensong', as mentioned, provides a glorious and atmospheric climax. In the background we can hear crickets chirping and scratching, as if we're listening to a song being played on a porch. Conversely, when the instrumentation surfaces above lone guitar and voice, the effect is confusing, ethereal, pretty, ragged and, again, poised. Daniels almost shouts the final "Amen" refrain, with such weight to his voice. That he's waited the entire album before juxtaposing his voice and his instruments quite this much points to the conclusion that this is the most important song here. While he may not agree with what he's singing (as exemplified with abandon earlier), we know that the truest beauty sometimes comes from the music when it is separated from the weight of context. The final minute is left to the crickets to serenade you before sleep.

Matthew Ryan Vs The Silver State