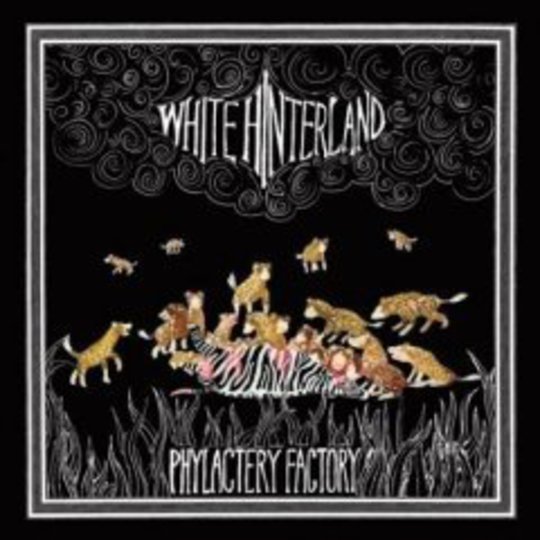 I love Metallica, but I hate James Hetfield. I love the Police, but I hate Sting. I even appreciate Amy Winehouse’s olden-and-a-golden Motown shtick, but I wouldn’t give her a Grammy for rhyming “door” with “Roger Moore”. Point is, music is easy. The hard part is getting a vocalist who can do the music justice with an articulate and interesting delivery of worth-while text. A vocalist’s delivery can make or break a sound, a song, or a band.

When it comes to the latest offering from Casey Dienel, the mind behind the machine that is White Hinterland - no joke - it totally sounds like Joanna Newsom packed herself a white hot jazz band and took ‘em on the road - except she’s dropped the Celtic harp, the psych-folk naturalismo, and the ten-minute elfin epics… on second thought, this sounds nothing like Newsom. Whilst taking the vocals away and focusing entirely on the instrumentals, Phylactery Factory is no doubt, a unique chamber-orchestra-cum-jazz album. It’s delicately mixed with a splendid variety of musical combinations. From piano ballads to bossa nova beats, the album completely lives up to its name as it offers jewel after jewel - that is, if the use of ‘phylactery’ was intended for any literal sense.

Combine the instrumentals with Dienel’s whimsical voice, a timbre that’s somewhere between cleverly aloof and unkemptly coy, and it sounds like kindergarten cabaret. It can often sound like lost archives of old school recitals - that is, if you completely ignore the lush, lyrical imagery. Songs are locked-tight with a stream-of-consciousness delivery of blossoming prose that otherwise wouldn’t effectively convince me without Dienel’s sombre, yet enthusiastic voice. From words of war, tales of tragedy, and senses of apathy, Dienel seems to make play of ‘mature’ topics with her voice that colours-in her lyrical pictures with a warm, child-like innocence.

Words are abundant, and it seems as if there’s an unspoken urgency to fit them all in, but it’s at conflict with the easy-going pace of the sometimes sable instrumentation - but it’s this conflict that make Phylactery Factory such a gem. From the windswept ‘Destruction of the Art Deco House’ to the jazzy ‘Dreaming of the Plum Trees’, to the ghostly bareness of ‘Vessels’, it’s a modern-age musical fantasy that’s bound to take you places.