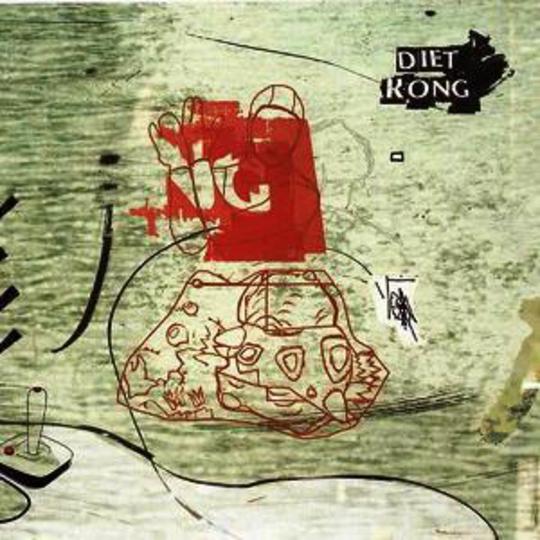 I feel like giving Keith Gladysz, a.k.a. Diet Kong, extra marks out of ten for each bizarre quality of the design for his eponymous debut record. One mark for the drawing of the girl cupping her breasts, both of which seem to be plugged into a joystick. One mark for the picture of Gladysz himself, clad in an all white suit, dirt smeared across his face as he leans against a pulley. Definitely one mark for the strange doodle of two men engaged in an indeterminate sexual act. Even a mark for the band name, itself unfathomably awful. Unfortunately for Gladysz, and for myself, there was also a CD included inside the extraordinarily odd, conceited packaging.

Diet Kong make a big deal of their ‘art’ credentials. Their MySpace is plastered with the words “Capitalist Art Rock”, as if that was a deep statement of their own ‘alt’ credentials, irony et al. Even more disconcerting are the several strange blogs Gladysz has posted, with titles like ‘Drugs are STILL illegal? Really?’. One wonders what Diet Kong actually hear when they listen to their music; obviously for Gladysz his band are sticking it to the man in hitherto uncharted ways.

Yet for anyone else, the music is as conceited and pretentious as the artwork, but just less amusing. The vocals are sort of sub-TV On The Radio style, while the group, for all the ‘subversive’ posturing, just sound like OK Go, if OK Go thought their music was incredibly profound. Indeed, for all the swagger the record just comes across as smug and strangely self-deluded. As bad as I feel about slating what is clearly an extremely personal project (the liner notes credit art direction, design, illustration, photos, sculpture (!) and music all to Keith Gladysz), this is really unlistenable tripe.

Perhaps it’s more elucidating to say that while listening to _Diet Kong , and gazing glassy-eyed at those preposterous graphics, all I could think of was Vulva. _Spaced fans know what I mean.