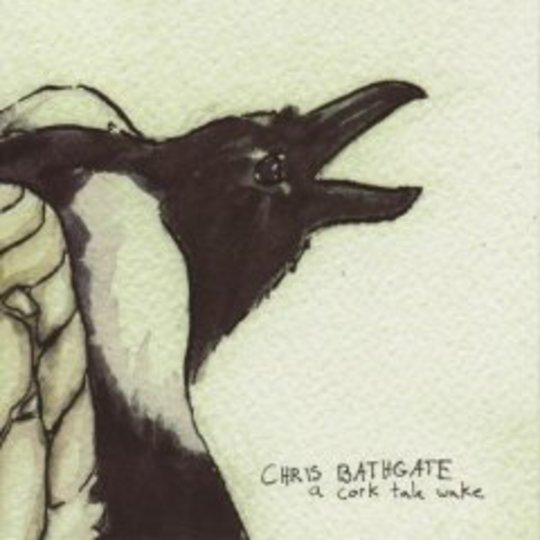 Seldom does the folk persuasion triumphantly dominate us market of heathens down from the sky-high wet dreams constructed by pop and its electronic glory. Too often does the musical spin cycle spit out tools like Newton F**kner (a.k.a., that guy with the ginger dreads polluting your television screens and radio airwaves with his dim-witted nerve to destroy 'Teardrop' with an unflattering cover). An exhaustive and archaic common tale, the acoustic battle is a daunting task—acoustic guitars embody a socio-political statement that simply doesn’t resonate anymore. In these highly technological times, acoustic music just sounds weak.

On the other hand, on you first listen, don’t make the same mistake that I did and put Chris Bathgate in the same category as that other guy (who from now on will go on unnamed - for if I ever type that specific letter combination again, my fingers may rot of cack-music-induced leprosy). For one, Bathgate hales from the Ann Arbor/Ypsilanti Michigan folk collective and contributes to 826Michigan, a non profit organization founded by Dave Eggers (kind of a big deal author type) that creatively mentors community kids. But this isn’t a job interview; since when do you care what’s on his CV?

Much of his debut A Cork Tale Wake showcases bare-bones cyclical melodies supported by conventional singer/songwriter guitar strumming, with the not-so-fussed vocals and ambiguous lyrics of self reflection and speculation — but what sets this album apart are the jewels of sonic experimentation that wither in and out. ‘The Last Parade on Ann St’ begins with a lyrically, soft-spoken approach to extinction, sounding exhaustingly restrictive, but it surprisingly blossoms into a sky-scraping, sparkling, electronic guitar track. All of a sudden this isn’t a folk record at all, it’s a bird, it’s a plane, it’s a… rock / post-rock / ambient-alterna—something-or-other.

Bathgate’s slow drawl-vocals are the only consistent aspect of the sound, as a wide assortment of instruments contribute a much-welcomed variety. The instrumental otherness that opens ‘Madison House’ represent a sense of mystery that is forlornly brought down to earth once the vocals begin. A Cork Tale Wake might be a more interesting album if Bathgate keeps his mouth shut. His vocals make it a folk record while the instrumental snack mix consistently dodge every genre that crosses its path — but whatever it may be, it’s worth a listen.