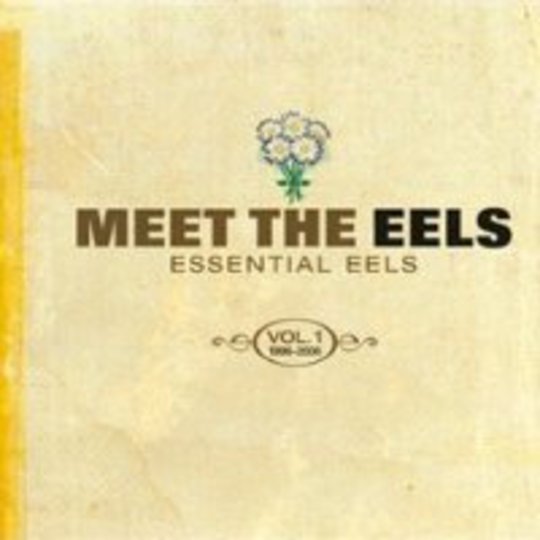 Whether it’s because Mark Oliver Everett, a.k.a. ‘E’, is one of the few male artists with proven quality and longevity in today’s scene, or simply because we all need a solid coal piece of darkness resting in our soul, there’re few who could argue that Eels aren’t a fine band more deserving than most of a retrospective. The problem: where to start and where to end?

The Eels archive is bursting with literally hundreds of tracks, including 33 alone on their last release, Blinding Lights and Other Revelations. Unsurprisingly, Meet The Eels: Essential Eels Vol. 1 is a fairly linear, chronological collection of singles with additional ‘key’ album tracks and a handful of unreleased material. At a whopping 24 tracks, it’s an even-handed selection which represents the band’s output as well as a single disc possibly could. For those of you wanting to delve further, or already in ownership of the last six releases, you can check out the double-CD rarities also out at the same time, Useless Trinkets. But for fair-weather fans, or simply those new to the cult of E, this is a fine place to start.

The opening music box chimes of ‘Novocaine For The Soul’ takes you back over a decade and remind you how alien and disturbing Eels sounded in a world that was gripped by the fading oompah of Britpop and the nascent crunch of nu-metal on either side of the Atlantic. At turns narcotic and woozy, roaringly bleak, it set the template for E’s patented take on blissful despair. Indeed, all the tracks taken from Eels’ debut record (there had been a myriad of E solo records over the previous decade) Beautiful Freak sound as good as they did in 1996, be they the juddering guitars of ‘Lucky Day in Hell’ or the schizoid nursery rhyme that is ‘My Beloved Monster’. Indeed, the immortal line “And no one will know my name until it's on a stone” nicely sums up the omnipresent morbidity that wears itself through the album like a millstone round E’s neck.

Things impressively (or worryingly) got darker still with the release of Electro-Shock Blues, which took in a period when E was mourning the death of his sister, mother and a number of friends. Only two tracks from the LP, ‘3 Speed’ and ‘Last Stop This Town’, feature on Meet The Eels… in their original forms, which is a shame given that Electro-Shock Blues might still be the finest Eels album to date – despite its constant moroseness, it’s graced by tender touches and uplifting highs at vital times. But hey, as E comments in ‘3 Speed’: “Life is funny, but not ‘ha-ha’ funny”.

Daisies of the Galaxy was a far more accessible album, featuring what is bound to be Eels’ most notorious song – the almost comically upbeat ‘Mr E’s Beautiful Blues’, with its “Goddamn right, it’s a beautiful day” refrain nudging Eels to as close to the mainstream as they ever got. Far more affecting is the piano-led ‘It’s A Motherfucker’, a paean to missing people.

The band’s rough ‘n’ ready Souljacker period is well represented on Meet The Eels, marking an enjoyable departure from the usual E sounds, and introducing a deep love of the Big Muff pedal and noise in general, though anachronistically the best track included here is the string laden swoon of ‘Fresh Feeling’. Contributions from the patchy Shootenanny! album are understandably sparse, with only ‘Saturday Morning’ and ‘Love of the Loveless’ represented here, but it’s Blinking Lights and Other Revelations that provides the most tracks on this compilation, and understandably so.

Blinking Lights…_ is the only album in the Eels canon that completes with Electro-Shock Blues for the title of Perverse Masterpiece, and at its aforementioned whopping 33-track firth is a fully formed masterpiece. Covering all the Eels bases from jaunty to spectral to plaintive and all in between, the most recent studio release by E is his most compelling statement yet, and a sign that there is much more to come. Amongst those included here, the compelling ‘Hey Man (Now You’re Really Living)’ and countrified ‘Railroad Man’ are fine advertisements for the double LP itself.

Of the unreleased tracks, ‘Get Ur Freak On’ isn’t a particularly well-judged addition to the collection, though the Jon Brion remix of ‘Climbing To The Moon’ is a beautiful reworking of the Electro-Shock Blues original, all flutes and strings.

A fine release in its own right, the finest achievement of Meet The Eels… is that it fails to fully quench the thirst for Eels, instead demanding that you explore their work in its (near) entirety. Go forth and conquer, morbidly.