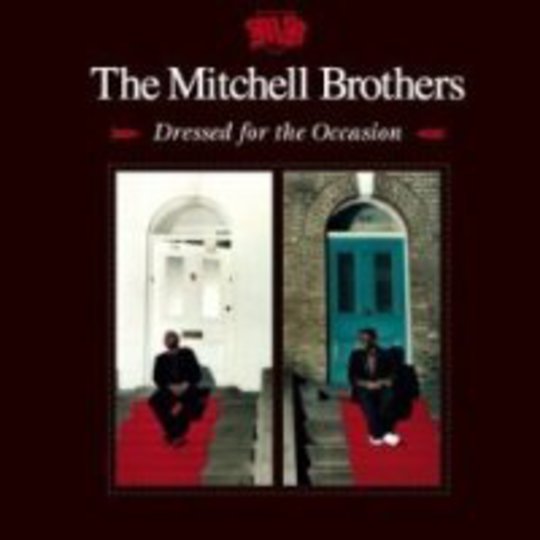 British rap music, a two-word summary: “jokes bruv”. And I don’t mean jokes as in the Sway Dasafo mixtape skit meaning either.

Following UK hip-hop is a lot like following a third-tier football team: deep down you know there’s more talented guys out there, you know that what you’re watching is of a lesser skill, lesser ability, and less enjoyable than what’s going on in the major leagues; but passion goes a long way and you’re fucked if you’re going turn your back on it all to hang with the champagne boys. A chip on your shoulder is not an optional accessory here. It’s a uniquely British attitude really, a mixture of self-defeatingness, self-loathing, and placing a higher value on honest failure than crooked success. At least in this context, tiny victories suddenly become earth-shattering or, to put it another way, ‘Witness (1 Hope)’ = the Johnstone’s Paint Trophy.

The Mitchell Brothers make for a fascinating case study, if not a fascinating listen, because they mark the synthesis between the last two false revolutions to happen to the idea of ‘Brits’ ‘rapping’. They have the lyrical content and delivery styles (ie, they shout for no obvious reason) of grime, and they have the financial backing and wholehearted support of Mike Skinner, who you may remember as a popular recording artist from the earlier part of this decade. And as we all remember, both grime and Mike Skinner were gonna drag British rap away from the Lowlife Recordings world of moaning about your giro and bring it into the big leagues. Remember that? The Guide _said it was gonna happen, and I refuse to believe _The Guide would ever lie to me.

Anyway, The Mitchell Brothers, despite all these outside influences, are awful. They’re awful when they do some Jamie T style “oy oy saveloy” acoustic guitar shit (‘Sole Mate’), or when they attempt what I think is supposed to be the world’s first pop dubstep track, but actually sounds like someone spilled his can of Relentless (NO HALF MEASURES) over the DAT tapes (the quite frankly stunningly named ‘Reservoir Drugs’). They’re a couple of mush-mouthed dudes who exude no personality or likeable traits, and while you may argue that caveat applies to 85 per cent of US major label rappers, at least they understand how to get themselves some mainstream commercial action. The Mitchells, on the other hand, just throw themselves at the whims of Calvin Harris, who takes over recent single ‘Michael Jackson’ and makes one of his oh-so-fantastic_ “Why dance to a song when you can just stand around smirking like a fucking twat?”_ tracks that have guaranteed him a place in the hearts of the British public. Maybe the idea behind this song was that students may eventually find a place in the hearts for a second hip-hop track alongside ‘Jump Around’?

The Beats, to be honest, is the worst record label in the world as of October 25 2007. It’s even worse than 1965 Recordings. Its roster consists of The Mitchells themselves, clapped out label owner The Streets, Example (like MC Paul Barman with a BTEC in computer networking), and Professor Green, a freestyle rapper known solely for his ability to get raped by American MCs every time he steps outside of the M25. It’s just a horrid roster, smug, irrelevant, aggravating, and devoid of a single characteristic that has attracted anyone to rap music in the past 25 years. It’s not even rap music for people who hate rap music; it’s rap music for people who hate their humanity. And the label has found its true mandate in ‘Dressed for the Occasion’.

Well known backers of urban music Franz Ferdinand even turn up on album closer ‘Slap My Face’ to help answer the question,_ “Why has nobody mentioned grindie in the past 18 months?”_

The end irony is that, for all the development we’re supposed to have made, this is British hip-hop of the worst kind: dispiriting and going absolutely nowhere fast. I’m sure The Mitchells are gonna enjoy spending their advance on Aquascutum coats and their one week at #63 in the album charts, but I just think it’d be nice if someone, somewhere, was actually prepared to put the hours in to taking this shit to the next level.