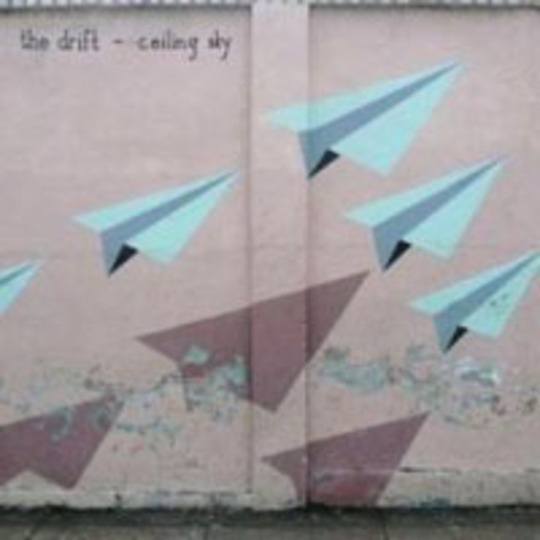 The slow drip, drip, drip of sound, electronic squiggles and ethereal patter and then, out of the haze, trumpets blaring hard and shiny bright, rhythms to pierce the celestial atmosphere with their echoing earthiness and marauding guitar. The Drift operate at the point where jazz and rock intersect, taking the often more liberal, free-flowing attributes of the former and tethering them to the brutish physicality of the latter. Their modus operandi is laid bare on Ceiling Sky, a six-song set consisting of previously rare and vinyl-only releases.

Particularly enchanting are ‘Steets’ and ‘Nozomi’, the songs which comprised their debut 12”. An ambient meander leads the unwitting listener towards all-consuming dread,_ ‘Steets’_ alive with menace, the harassing boom of trumpets and insistent rhythms playing a tattoo on our hearts. Then just as quickly the malevolence is vanquished by quickly stabbing guitar. There are no dead-ends to these ‘Streets’, just opportunity and imagination stretching out in all directions. Guitar is our guide on ‘Nozomi’, leading us through a valley of mournful Morricone, those dewy-eyed horns and rhythms that pitter-patter like rain against a hearse, casting shadows deep and heart-engulfing.

Plucked from the double-vinyl edition of debut album Noumena are the title-track and_ ‘For Grace And Stars’. They are expansive, elaborate offerings that weigh in around or over the ten-minute mark. In _‘Noumena’ cyclical patterns and repeated motifs weave a dense tapestry, but at times the restlessness becomes a little overwhelming, you have to grip tight to any semblance of tune or lose yourself in the labyrinth of ever-shifting sound. ‘For Grace And Stars’ is more direct, the melody building with a sense of surety and insistence, sounds layered one atop the other, higher and higher, creating a heavens-questing skyscraper only to tear it down again at the close.

The collection is completed by a duo of remixes, Kieran Hebden bringing his inimitable electronica anarchy to ‘Gardening Not Architecture’ (Four Tet Remix) and Xian Hawkins aka Sybarite remixing ‘Invisible Cities’. Of the two re-imaginings, the Four Tet cut is the most incisive, the percussion harsh and vigorous, instilling real oomph.

A compilation which completists will revel in, the balancing of the esoteric and instantly engaging evidenced by_ Ceiling Sky _should also help win more believers to The Drift’s jazz-rock cause.