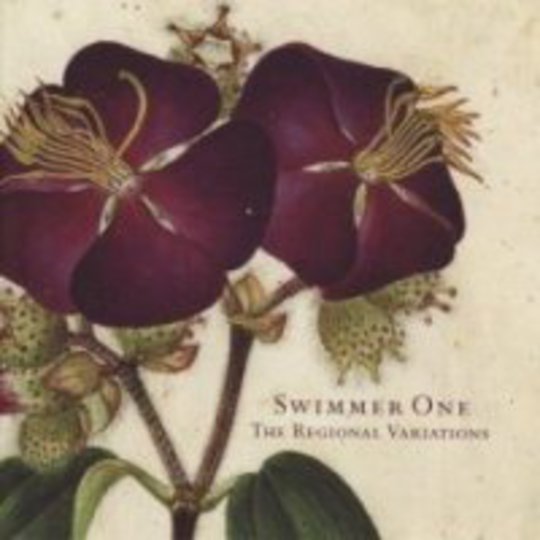 Autumn’s a cantankerous swine of a season. One minute it’s a romantic courtyard of crumpled earth-worn leaves, where lovers sneak kisses amidst a backdrop of slowly receding greenery; the next, force ten gales are veering you headlong into the path of a Number 42 while you stagger to work, leaving you cursing the ineffectiveness of those damn greenhouse gases.

Aye, this time of year can be a bitch alright – especially for the less optimistically minded – and with the release of The Regional Variations Edinburgh/Glasgow-based electro smugglers Swimmer One have perfectly encapsulated fall’s bittersweet disposition.

Laden with doom-cast canticles, this debut LP is an understated juxtaposition of absorbing melody and scything lyricism that transcends beyond its initial coy ushering into a whooshing gem of elegiac synth-carved splendour. Exploring every imbecilic facet of modern day pop-culture – from reality TV’s inexhaustible grip on society to the trauma of a faceless internet romance – the duo of Andrew Eaton and Hamish Brown inject a stream of playful, yet caustic, asides through their minimalist digitisation; creating a record steeped in the crabit tradition of Scottish songwriters but exuding a warmth of heart akin to the ethereal excursions of Flotation Toy Warning.

The machine crafted beat of opener 'Drowning Nightmare 1' tentatively leads the ears down a winding stairwell of dank zigzagging keys and bolshy bass, lit only by the placid demure of Eaton’s soft, intelligent mew. With such a bleak exterior it’d be easy to disregard Swimmer One as yet another proponent of the rejuvenated, but utterly dreary, shoegazing scene. But for all the downcast protestations of tracks like ‘The Fakester Genocide’ and the eerie ‘Whatever You Do Don’t Go In The Basement’, an uplifting hint of optimism begins to shuffle its way onto the fore with teasing regularity.

‘But My Heart Is Broken’’s transient subtlety recalls the heart-charged hopefulness of Aereogramme’s ‘Barriers’, dampening cheeks with a symphonic sheen reminiscent of ’80s synth-poppers the Pet Shop Boys. And it’s in these moments of brittle expectancy where Swimmer One ground themselves amongst the finest luminaries on Scotland’s expansive musical landscape. Skewed by a sprawling tableau of swirling, stirring electronica, the record’s laconic narrative is converted into a euphoric vantage point; allowing the morbid despair of ‘The Balanced Company’ and ‘Regional’ to thrive as throbbing, dashing, lip-pursing slabs of cosmic regency.

Captivating to the point of hypnosis, The Regional Variations is a record of such heart-melting honesty not even the bitter autumnal chill can penetrate its innately warm interior.