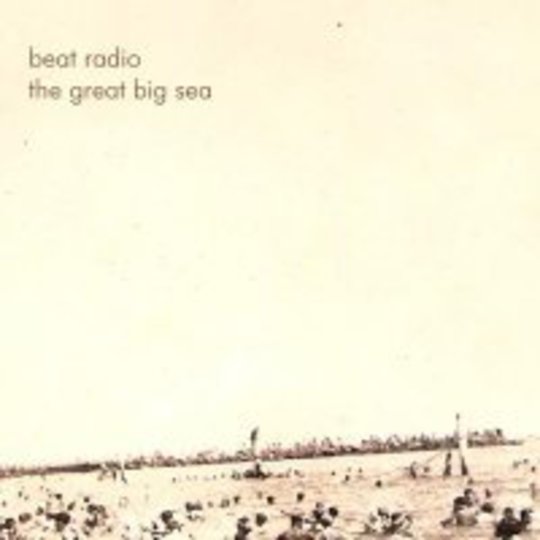 New Yorker Brian Sendrowitz, known along with some hired hands as Beat Radio, made and released an album last year as a free download. The Great Big Sea was correctly lauded by several smaller figures in the blogosphere and a few other places too, but it never received the kind of exposure that it truly deserved. Now, nearly a year on, the record has been given a full physical release, along with a lovely little bonus EP as well. Lawks!

Though this may sound like any rags to slightly less raggedy rags story told in the overpopulated world of independent American music, The Great Big Sea has much more to offer than the racket in the club on the corner of Bronx and Main or whatever they call their silly roads out there. There's a massive longing that, in the wrong hands, would be utterly sickening in its over-reaching self-pity, but in the hands of Sendrowitz and Beat Radio becomes perfectly loveable. It comes from the squeaky rasp of the voice, the lower than lo-fi production, the searing honesty of the sentiments, the audibly beating heart that propels blood and love throughout the whole record.

'Elegy' is a tale told confidently of longing and the helplessness of distance. Sendrowitz knows how pitiful it is to harp on about yourself when a loved one is out of reach, but he lets reflections on this become the driving source of the words rather than the tired sentiments themselves. "Every line I write somehow is like an elegy" is more heartfelt than Chris Martin going for the dog-eyed sympathy smattering of "I miss you" over and over. Though the situations may be similar, Sendrowitz comes at his with wit, grace, respectability and the knowledge of his own limits. Doing all this with the musical grace of Teenage Fanclub exploring Pavement's toy box with a trained monkey at the controls of the four-track certainly helps.

The only time the words err on the side of blind and simple emoting rather than crafty references to it is the closing track. 'The Places That I've Been' sees our hero striking a balance between blustering uncertainty and the shock of massive commitment. As he wails that "good intentions will prevail" it's obvious that we're ending on an ultimately hopeful sentiment, heralded by thrillingly tense tremolo guitar lines and the absolute limits of the indie-pop dynamic range.

Only, with this release, it's not the end because there's that little EP stuck on the end to deal with as well. Predictably it’s refreshing and enthralling, with 'What I Love The Most' standing out as a piece of worthy musical endeavour full of Sendowitz's inimitably nervous tension and the payoff of a climax that fucking rocks. Like, properly rocks. Truth be told, that song and the album proper's closer alone are worth the price of the whole record. Two of them, probably. So even if you can't really get hold of The Great Big Sea all that easily, you should go to the website and download it, send e-mails, send cheques, send letters with fond wishes, send love and thanks, all of it addressed to Beat Radio. Actually, you're better off getting the real address. Yeah. But by Christ it'll be worth it.