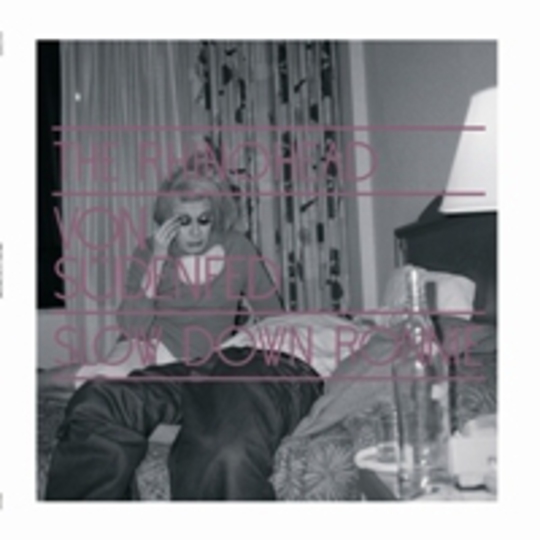 Mangled minds pan to Mark E. Smith, with his usual slow-tongued slur snatching over the trials and tribulations of Ronnie O’Sullivan’s turbulent career as Von Südenfed’s lumbering limbs reach out to embrace The Rocket on ‘Slow Down Ronnie’. It’s all reasonable enough, yet dribbles along until the XTRMNTR-aping chorus romps in. Compared to the accompanying track on this 12” and the unhinged warp that Tromatic Reflexxions sits inside, though, it all seems fairly timid and uninspired.

Somewhat misguidedly labelled as Northern Soul, ‘The Rhinohead’ shakes with a familiar tone. But the song is just as much Mouse On Mars generals Andi Toma and Jan St. Werner referencing their own brand of leftfield house under a new guise as anything else.

Rather obviously, one of the key differences between The Fall’s Reformation TLC and Von Sudenfed’s Tromatic Reflexxions is Smith. But where on The Fall’s recent long-player his deranged drawl sounded chafed and aloof amid its hollow production, this collaboration has seen The Fall lynchpin with a newfound bawl, deliriously delivering his nonsensical lines. So used to the centre-stage, jabbering away, he seems unusually content in taking a step back behind Toma and St. Werner.

The Pilooski remix of ‘The Rhinohead’ tailors the industrial dirge into a track of true dancefloor ingenuity, filling the original’s blunt lapses with atmospheric undercurrents with a mule's hoof to the jaw around the three minute mark that would move even the most cement-headed of bitter-lipped revellers.