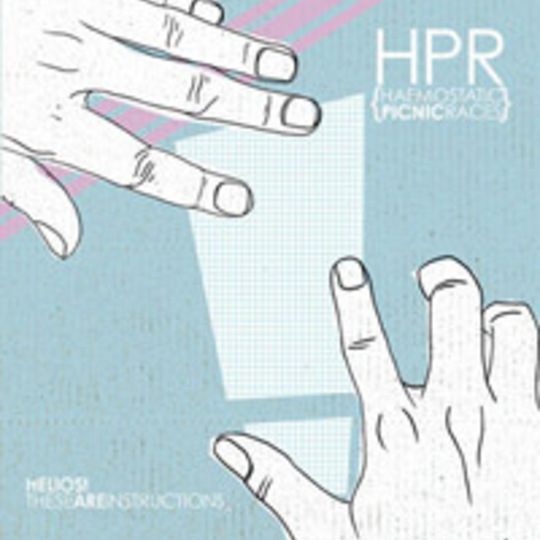 Dunno ‘bout you, but my Sundays have been revolutionised by mobileAct Unsigned, the latest of innumerable television talent shows designed to filter a new star to the surface of the public’s conscience and then unleash them at the charts, fingers crossed for the summit of both albums and singles success. While T4’s post-Hollyoaks battle of the bands isn’t quite X Factor or Pop Idol, its format is exactly the same; there’s even a nasty judge called Simon.

What’s this have to do with Haemostatic Picnic Races? I’ll tell you: had this four-piece from Kent held fire on this debut album a bit and entered the Alex Zane-presented back-slap fest, they’d almost certainly win it and land themselves a cushy A&M deal and a 60-grand advance. Why? Jo Whiley, one of four on the weekly judging panel, has expressed her affection for emo on the show, and HPR take the formula of so many sound-alike guitar-sluggers and mess it the hell up; they’ve a similar creative spark to Minus The Bear, albeit without the technical precision. Radio 1’s champion of new music – in it, and her, we should all trust – would wet her knickers over this lot.

Also: form’s on HPR’s side. They’ve already won one competition, to land a place on last year’s BSM Christmas Party bill at London’s Barfly. No big deal in the grandest of schemes, but even the tallest oak grows from a tiny acorn, and all that bollocks. Up against the 19 bands that have made it through the elimination stages of mobileAct, HPR could fart into a collinder and run the rattle through a delay pedal and still rape James Oldham’s ears wide open (enough, even, for the man to wake up to the fact that The Courteeners are a sack of gash).

But, the Jake Armstrong-fronted four-piece didn’t wait, and here we are: an album of undeniable quality that’ll sink like a stone ‘cause, up against the aforementioned Seattle act and a handful of other technically minded rockers (up to but not including Dillinger Escape Plan), it lacks that certain something that only comes with experience. It all feels so second-hand, if not second rate; they’ve even got the ‘funny’ song titles in place, like Meet Me In St Louis before them. While MMISL are mental, though, Helios! These Are Instructions seems oh-so considered and calculated. Its edges are not quite roughened through wear, but by deliberate it'll-look-good intent.

At its best, when focusing on punchy riffs and squawked vocals, HPR make a substantial impact: ‘Bugz, Fuck Off! Where Did You Come From?’ closes the ten-tracker out with a flourish, while before it both ‘I Am Woodenbox’ and ‘Orangutang-orang’ wobble with accomplished poise. But many of the band’s best ideas are utterly indebted to the work of influences before them, which wouldn’t trouble the judging panel of a talent show aiming to take a band like HPR into wider markets but does irritate the ears of anyone well schooled in this field.

That Simon fella, he name-checked both Enter Shikari and Gallows t’other episode, although he did add a no-no ‘The’ ahead of the latter act’s moniker. Clearly aware of pop-inflected punk’s potential within mainstream demographics, perhaps he should bend an ear the way of HPR’s MySpace and take a chance on a late wildcard.