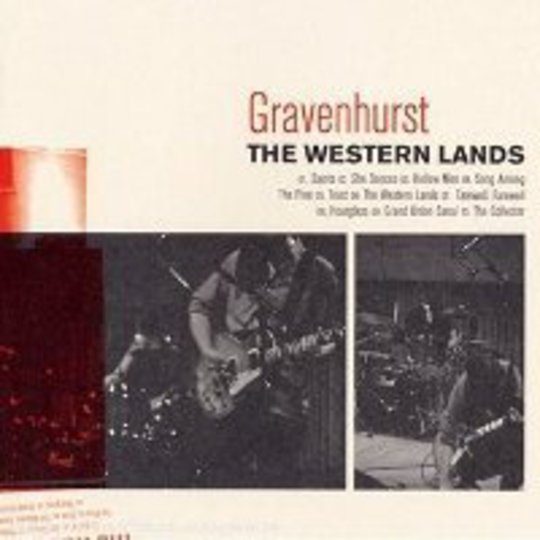 Before listening to The Western Lands I was – wrongly – under the impression that the Nick Talbot-fronted four-piece Gravenhurst was a folk act, albeit one with a few tricks up its sleeve (or why else the Warp signing?). Turns out that Talbot and company are bona-fide monster rockers, with more than a fair share of standalone efforts on this third album for the aforementioned stable of all things glitch-toned coming at the listener with teeth bared, fresh claret dripping a trail in their wake.

It’s entirely appropriate that this album’s title is shared by a novel by William Burroughs; said author’s work is haphazard of style, quite impossible to pigeonhole using conventional methodology, and likewise Gravenhurst are keen souls indeed when it comes to confusing their audience. Graceful and melancholic numbers like ‘Hourglass’ mask the beast within, hidden behind a front occasionally too fey to withstand the barrage of boisterousness served elsewhere. As a result, it’s songs like new single ‘Hollow Men’ that make the most immediate of impressions: slavering feedback and propulsive percussion serving to muddle the mind’s preconceptions quite exquisitely.

Talbot’s low-in-the-mix vocals add an unexpected ethereal quality to proceedings: even when the noisier arrangements come calling, such as ‘Farewell Farewell’, our protagonist’s constant tones keep the album grounded enough so that any unexpected tangents don’t shoot into space with attentions impaled. Although his approach borders on mumbling – certainly my parents would berate the man for not pronouncing his words clearly and crisply – Talbot’s vocals mix with the music about them to become another instrument proper; messages are lost in the murk, but the fug’s an appealing blur nonetheless.

Closing with a song, ‘The Collector’, that combines twin sides of the Gravenhurst sound – discordant noise and luscious folk-tinged indie – one is led to conclude that this may just be the most complete album yet from Talbot and his musical associates. But, of course, with limited previous on record, this reviewer is in no place to make such a statement. So, over to you the enthused and informed...