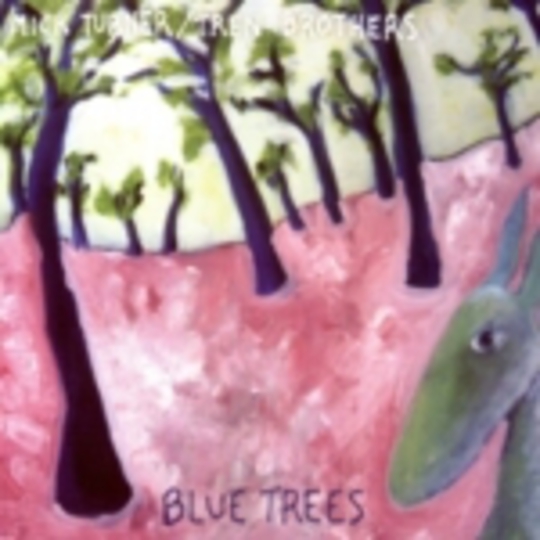 The guitarist for Dirty Three, a high-profile collaborator with the likes of Cat Power and Bonnie ‘Prince’ Billy and a renowned artist to boot, Mick Turner possesses an obvious talent in the instrumental post-rock scheme of things, even if his solo musings have recently tailed off slightly – after three solo albums in five years, Turner has been relatively quiet since 2002, releasing only a handful of tracks for limited-edition affairs on various labels either under his own name or alongside Dirty Three drummer Jim White under the** Tren Brothers **banner.

For anyone who didn’t or couldn’t track down these rarities, Drag City are saving you the bother with the Blue Trees split compilation. The sound of loose ends being tied up, it features eight songs from Mick Turner preceded by six from the Trens, all of them bearing the lazily relaxing and relaxingly lazy hallmarks of Dirty Three’s slowest works, albeit devoid of the swooping violin of Warren Ellis.

After a while, though, it is apparent that there is something missing, as gaps that are normally filled by a single stringed instrument unite to form gaping holes threatening to swallow up the enjoyment. Part of this is down to the minimalist nature of the songs themselves – the majority of them consisting mostly of just percussion and either guitars or piano, occasionally joined by harmonica, strings and others in moderation, all played at a pace which almost extends beyond casual.

In places it works well. Opening Tren Brothers track ‘Swing (parts 1 & 2)’ sets a comfortable scene not dislike a couple of songs from Mogwai’s soundtracking of Zidane: A 21st Century Portrait (particularly ‘725’, perhaps), as layered guitars and drums are accompanied by quiet hints of strings, descending into a flurry of drum-roll noise before emerging from the smoke unscathed with a harmonica in tow. Later on, ‘Help Mr Rabbit, I Can’t Get Out’ will up the tempo with much the same set-up, the general feel thickened by reversed guitar chords behind Turner’s noodling electric guitar line.

Turner’s solo work, too, has its moments of glory – ‘Carny’ is a higgledy-piggledy carnival-themed number, with a viciously gated stereo delay on the drums, warped strings, fairground organ and xylophones taking the fore, whilst ‘Angel #1’ is a smooth, guitar-only effort so soothingly slow that it’s almost stationary – but soon the niggling problems creep in. Some of Turner’s solo pieces are so short that there’s not enough to time to even acknowledge them, let alone appreciate them, and four of the six Tren Brothers tracks seem to just be pale sound-alikes of the first.

It’s probably worth remembering that, unless Turner was blessed with some kind of foresight, these songs were never meant to sit on one record together, and as a result Blue Trees seems to be a little hit-and-miss and samey despite its few moments of glory. This was never going to be up there with the best of Mick Turner’s work, solo or otherwise, so it’s no surprise to find that it’s not.