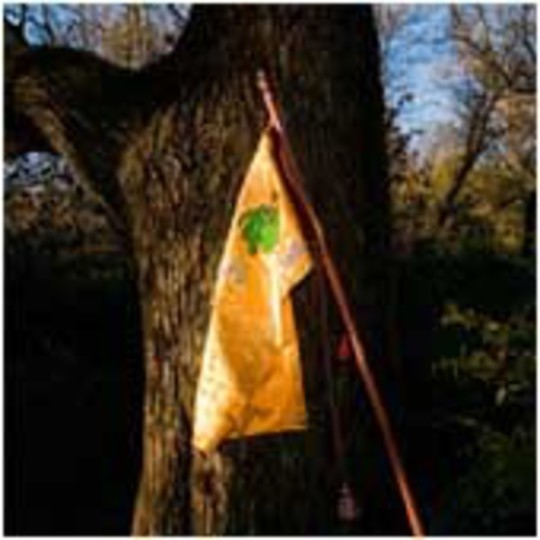 Earlier this year, Iowa-based quartet Raccoo-oo-oon brought their pysch-rock manoeuvres to these shores with a small tour on the British toilet circuit. Despite playing to less than a 100 people each night, the shows whipped up interest from the press and their audience in the band’s first album proper, Behold Secret Kingdom. This month sees the album receive its long-anticipated UK release via the rather fine Release The Bats label. It’s been well worth the wait.

From Deerhunter to Grails, it seems that all the best albums of the year thus far have been quite far from ordinary. 2007 has seen a splurge of impressive releases from the set of experimental rock, with great records from Flower-Corsano Duo, Odawas and Aa. So, what makes the pysch-rock jams on Behold Secret Kingdom so bloody special?

What those other albums lack is intensity. Behold Secret Kingdom is a full-on beast, always challenging and occasionally brutal to the point that it becomes overbearing. This unfathomably vehement method of engaging its listener is, presumably, garnered from the interest in all things rawk that translates on the record. Guitarist Darren Ho shows a love for both the down-tuned riffs of early Sabbath and the noise of The Boredoms, while the tribal-like percussion that plays a major role during the record’s tenure brings to mind Liars and Gang Gang Dance. They may have upped the production values since their limited run of CD-R releases in the past, but Behold Secret Kingdom still sounds raw and impetuous – characterised by seemingly-improvised saxophone freak-outs and crashing percussion with an emphasis on chaos.

Chaos is certainly the most entertaining thing on Raccoo-oo-oon’s debut, but there are quieter moments that act as go-betweens between the cathartic noise. ‘Visage Of The Fox’ tinkers with strange percussion and demented pagan chants before breaking out the rudimentary cymbal-heavy crescendo, while ‘Diamonds In The Dunes’ features three minutes of incongruously quiet guitar noodling. As soon as ‘Invisible Sun’ starts up the quiet is gone, detonated by louder-than-thou riffs and a fervent saxophone flailing in and out of the noise. The Mars Volta, bless ‘em, can only wish that their jazzier moments were as good as these.

Raccoo-oo-oon have pulled out an album which, as yet, I’ve seen no negative criticism for. So what are you waiting for? Behold Secret Kingdom is not only a fantastic album, but it’s also limited to 1,000 copies on CD. Vinyl? Probably even less. Get on it.