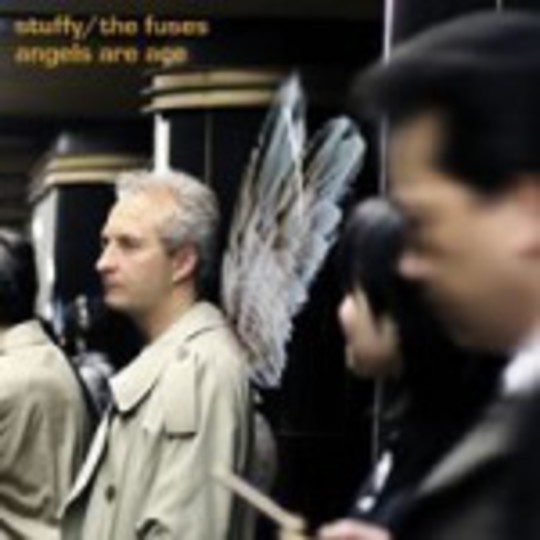 “You remind me of me before I had me shot!” shouts Stuffy of Stuffy/The Fuses amongst the insistent guitar crunches, drum poundings and keyboard meandering on ‘Spineless’. Yet as their second, Steve Albini-produced long-play effort Angels Are Ace proves to be entirely complimentary, the bulk of observers so far have likened them to a cross between Fugazi and XTC (a jagged edge with a sharper wit, a flash of bloodied teeth with every wry smile, yep, that sounds about right). Having said that, Stuffy/The Fuses (or ‘& The’, if you prefer) are one of those bands that sound almost like nothing else, to the extent that they sound almost like everything, in an alt-rock sense anyway. They’ve got a handful of Mcluskyisms here and a sprinkling of Pixies there – perhaps why they seem so at home with Albini – plus, in various places, the (mental) unhinged-ness of Eighties Matchbox, the playfulness of Quickspace and even – gasp! – the odd Britpoppy string arrangement.

Occasionally their attempts to try and be anything other than a stupidly brilliant rock band is a bit too awkward to handle: opening suite ‘The Champagne Socialist’s Mid Term BBQ Pt. 1’, while acting as incidental music in the same vein as ‘1993’ did for Carter USM, still sounds a bit too forced to not appear tacked-on, and makes you wonder whether they should have just arrived all guns blazing with the incendiary ‘Ahhhh Song’, or in the same way they leave the album, epic yet understated. But when it works, it works splendidly well, such as former single and album highlight ‘Joe C (Is An Idiot)’ which starts with guitars reminiscent of indie popsters such as Saloon or Delgados and has an organ sound festering all over it like it got chucked out of Clinic for being too jovial. Oh, and some demented bagpipes… nice. It’s to their credit, though, that they emerge from all of it sounding emphatically of their own, able to switch so effortlessly from something as delicate as ‘The Broken Family Man’ to something as drummer-knackering as ‘Sir Wants Sex’.

As the year goes so far, this is the best proof that you don’t have to be cloyingly twee to have aggressively drole lyricism and a steady control over deftly executed pop melodies and be able to rock the hell out. Angels are ace, indeed, but this cements Stuffy & The Fuses as being totally ace-core.