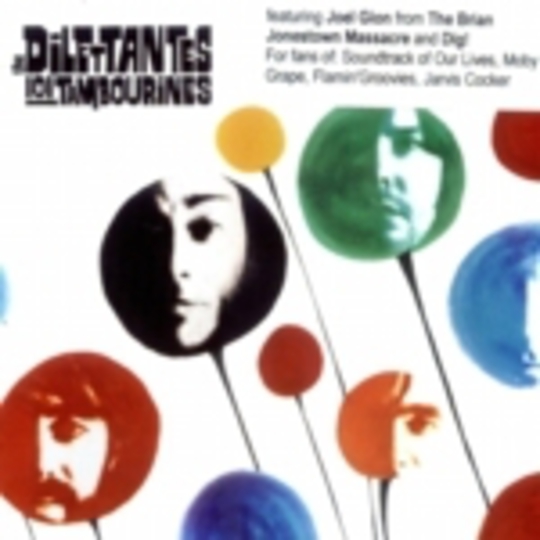 Promotional stickers proclaiming associations with other bands are a risky business.

Pitching yourself on past achievements is all well and good if your previous – or in the case of Brian Jonestown Massacre’s Joel Gion, your continuing – project happens to be a one-man multi-layered soundscape that dropped jaws worldwide, but it’s all slightly less impressive if your one claim lies as (let's be honest) an expendable tambourine player, and most of the press pack rattles on about the success of DiG!, a film which didn’t exactly portray you in a brilliant light. Given all that, if I’m totally honest, I was expecting The Dilettantes debut album to be awful from start to finish.

But it turns out that Gion is more than just a tambourine man, he’s also a half-decent vocalist and songwriter, and his new quartet provide a mixture of late '60s-slash-early '70s rock and more modern, country-tinged alternative rock. Through its twelve-song programme, 101 Tambourines is comparable to the cool delivery of Lou Reed and his Velvet Underground and the posturing of the Rolling Stones in places – largely through the pose-striking lead guitar line and swaggering “wuh-uh-ohh, I’m ready to go” chorus of opener ‘Ready To Go’ and its sneering successor, ‘Subterranean Bazaar' – rounded off with some light psychedelic touches, whilst in others it sounds almost exactly like Urban Bohemia-era Dandy Warhols, from the Courtney Taylor-Taylor carbon-copied vocals in ‘Like Crazy’ right down to the ‘Solid’-esque bah-bah-baaaahing of standout track ‘The Whole World’.

If you think all this points to a band more accessible than BJM ever were, you’d not be wrong – 101 Tambourines is the straightest of lines next to the ever-fluctuating output of Gion’s other band, though its simpler approach does suffer from a lack of variation as the album continues on. Throughout its near fifty-minute duration, nearly every song has the same arrangement and tone, and whilst you don’t always need much variation to make a great album, there does at least need to be something to make it all worthwhile, be it strong lyrics, hooky choruses or just something else to help it stand out.

In that respect, 101 Tambourines is hit and miss, particularly lyrically, where without warning there’ll crop up such lines as "here comes the tambourine, man you know what I mean" or maybe "all that i want to do is look like crazy people do, talk like crazy people do / why? 'cos so are you", which at times can be unintentionally hilarious. The musicianship is flawless though, which partially makes up for its lyrical embarrassments, and even though there are some question marks over the vocals in places, they're ultimately saved by their own cool, relaxed delivery.

Yet despite drawing from both the past and the present in its battle to hold your attention, The Dilettantes’ debut falls sadly flat too often, stuck in one gear throughout until it becomes slightly monotonous and it all screams average. Curiously though, it's still nowhere near as terrible as I was expecting.