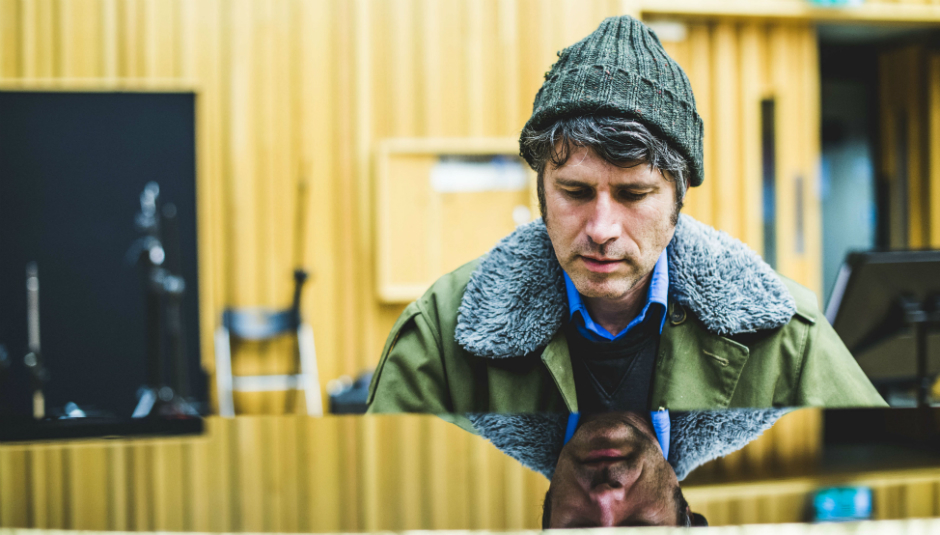 Despite his unfathomably eclectic career Gruff Rhys has always made music that feeds into the time of its release, albeit often from the sidelines, in abstract ways, looking in.

In this near-apocalyptic climate of 2018, Rhys has returned with an eighth solo album, Babelsberg, that is directly prescient of our current world.

Gruff has form dancing with ideas of the apocalypse on several Super Furry Animal’s tracks, like 2005’s ‘Zoom’ where he posited the suggestion, “Kiss me with apocalypse”. But this was always suggestive of a possible outcome. What makes Babelsberg different is just how directly it feed off, and into, our dark political reality.

Days before the album was released into the world, a deeply contemplative Gruff is on the line to talk me through this quality and thought-provoking new record. I ask him if he had a premonition about the future when writing? Babelsberg creates the perfect vibe for a world living in the aftershocks of the Trump election and Brexit vote.

“The rhetoric was there already, the only thing that’s happened is that the political reality has caught up with the rhetoric. It was there at the time, all over the news. For example, Trump’s Primary campaign was going on at the time and Brexit was on the Conservative manifesto. So that was there, and people voted for them. It’s been going on for years,” he says.

While the lyrical content is often as abstract as ever, many songs like ‘Architecture of Amnesia’ (“Seal the windows, lock the doors; paranoia will eclipse the rational / Scare the people with paranoia”) and ‘Drones In The City’ take on an overtly political air.

Babelsberg is an exercise in juxtaposition, with the dark reality of the lyrics offset by swooping, lush 60s orchestral country-pop arrangements of the kind made famous the likes of Lee Hazlewood. Musically, Babelsberg is optimistic light poking through the cracks of austerity.

The album grew from the track ‘Negative Vibes’ which in itself is a contradiction as Rhys sings, “You and I can conquer all the negative vibes and get on with our lives together” in a song that at-first appears to wallow in the vibes of the title.

Taking one of his customary contemplative 10-second pauses to gather his thoughts, Gruff explains, “The start was the song ‘Negative Vibes’, which I had been playing live for a while and after a while, I had a batch of songs that fitted in with that song. Quite simple songs, in a way. I wanted to try and push the arrangement a bit. In terms of its sound, it was a process, I started doing my previous album American Interior, and then I did a soundtrack and I was working in the same studio, I knew I could go in for just a few days and record a batch of songs.”

Having a batch of songs and an invitation from Ali Chant to record at Toybox Studios, Bristol, Gruff and a small band (featuring regular drummer Kliph Scurlock (ex-Flaming Lips) and multi-instrumentalists Stephen Black (Sweet Baboo) and Osian Gwynedd) laid down some ‘stark’ basic tunes more in keeping with the lyrical vibe.

“We all live within a square mile, so we I just drove from house to house in a van and we went to Bristol, every day for about four or five days. We rehearsed for a few days and then recorded,” says Rhys.

The ten tracks then sat on ice as composer Stephen McNeff added the lush orchestral scores to be played by the BBC National Orchestra of Wales. The results speak for themselves. Gruff handed the tunes over completely, an act of trust that many artists would not place with outsiders when it comes to their music.

“I trusted the arranger. I like his work as a composer and I was working with him on a completely different project around the same time. It made sense to work with him. I sent him a bunch of music to listen to, but I trusted him to do magical arrangements.”

These “magical arrangements” are abundantly apparent on album opener ‘Frontier Man’ which is the perfect pop ode to the mindset of a populace that voted for a reality star and leaving economic certainty for turmoil. “On the frontier of delusion / I’m your foremost frontier man”, sings Gruff on the opening line as the sweeping strings float on.

As Babelsberg slowly came together, Gruff embarked on the SFA reunion gigs celebrating the classic Fuzzy Logic, Radiator and Mwng albums, a connection to the past while the future was being created. Babelsberg is also a reconnection with Rough Trade records, “It was just a matter of being reunited with my back catalogue, it made sense for me to talk to them,” says Rhys.

The album was also affected by several real-world manifestations of its overall vibe during its gestation period. The initial recording process was overshadowed by the spectre of gentrification, as Toybox Studios was earmarked for demolition for luxury flats. Has the once creative space, gone? Gruff contemplates the situation.

“I think so, I haven’t been back for a look, but that was the context of the recording session. The studio isn’t going to be there the following month. In a way, that’s why I recorded there without a record deal. I got invited to record by Ali Chant because I had a bunch of songs and he was like: ‘You better be quick because they are knocking down the studio.’ There was quite a real deadline.”

Austerity, a lean to the right, gentrification. What sort of title could fit an album created with this reality in mind? Rhys explains his thinking behind the naming of the album.

“I wanted a title that alluded to the recording session and the impermanence that we felt during the session. Just that whole veneer of opulence that where austerity policies have run the country to the ground and people are sleeping on the streets while a small percentage of people get to sit in glass towers. I had a few different titles, but I like the idea of people trying to build towers to reach heaven and creating hell. But I didn’t want a religious title, so I found another title with Babel in it.”

In reality, Babelsberg is the world’s oldest large-scale film studio, where Fritz Lang made Metropolis. But Rhys has created a fictional monument built from biblical tales and that reflects modern life to pin his current songs to.

The concept of a ‘tower’ to reach ‘heaven’ but ‘creating hell’ echoes the Grenfell disaster. Did that have any effect on the making of the album, as it so directly mirrors its central concepts?

“When I was singing ‘Selfies in The Sunset’, I finished that in London at a studio called Lynchmob which is overlooking a gigantic cemetery and at the far end you can see Grenfell. It was just there. It’s one of the last things I recorded on the record,” says Rhys, recollecting a scene that, from the sound of his voice, made a lasting impression as the album was completed.

The more time a listener spends with Babelsberg delving underneath the lush, optimistic music, the more riddles there are to solve with answers about the political reality.

I turn the conversation on to the way in which environments affect a recording. Babelsberg has a very British air but also the kind of sweeping, panoramic sound that recalls Californian vistas and sunshine journeys.

“I recorded most of it in Bristol, added the orchestra in Cardiff and then mixed it on Los Angeles. I think it can have real physical effects. I only mixed this in California, but to record a record in desert conditions my vocal sounds a lot less nasal. If I am recording in Wales, it usually sounds quite damp.”

Contemplating this further, Rhys adds, “There are some weather conditions that you can’t get away with on record. It’s more about imagination than where you are, in general.”

“Also, I think electricity can really affect a record. If you are working on American power or British power, it drives machines differently it drives compressors differently. I know people, for example, who have their own generator, so they are not on European voltage. I think there could be minute differences, but it does have consequences for the sound.”

Babelsberg is an album packed with ‘consequences for the sound’, producing not only one of Gruff Rhys’ finest works, but also one of 2018’s best albums. It’s an album that evokes our time and place while echoing the classic sounds of the past. Will things get better, for the UK and the world? “Personally, things could have been more optimistic by now,” he says after a long, contemplative pause. “But they’re not! I felt OK to put the album out.” Perfect timing as always then.

Babelsberg is out now via Rough Trade. For more information about Gruff Rhys, including forthcoming tour dates, please visit his official website.