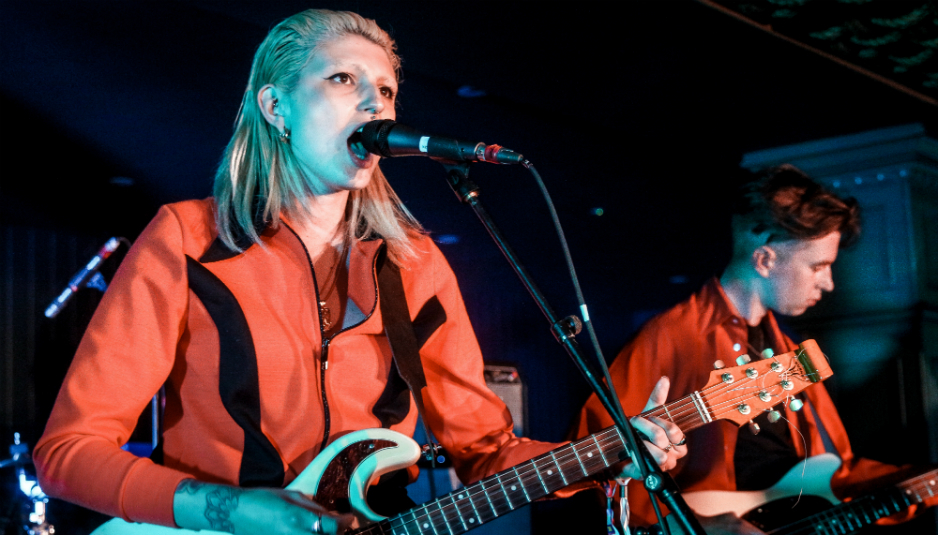 As Lucia Fairfull strides off stage, finding her way into the sunniest corner of Brighton Palace Pier, I’m still catching up with what’s just happened inside Horatio’s. Her band LUCIA close their set with ‘Melted Ice Cream’, rounding off a glorious racket that’s caught more attention than you’d expect for an early afternoon slot. Though the single came out last year, it seems destined to live on as a timestamp for 2018, as evocative of its era as anything by Weezer or Best Coast – perhaps the two bands most identifiable in its genetic make-up – immediately recalling a specific time and place in our lives, a history shared by our own experiences as much as the rock hagiographies that stack up around them.

And what is that history today? Like Schrödinger’s cat, the debate surrounding “guitar music” and its vital stats has reached an impossible state: indie rock is both dead and alive, depending on who you ask. Every year it’s on the cusp of a revival, or worse than ever, or else it never went away. I doubt LUCIA care too much, because whatever nebulous genre badge you care to tack onto the Glasgow four-piece, it’s clear that they’re nailing this rock’n’roll thing on their own terms.

Watching her tear through that ferocious set in Brighton, it’s hard to believe that Fairfull began life as an acoustic singer-songwriter – though as with many budding young musicians, it provided an opening. “I guess I was just young,” she confesses. “I was really interested in doing music, and acoustic’s just where I started out. Not to say that’s all I was listening to – I was listening to a lot of rock ‘n’ roll music from a very young age. But it was how I started out naturally, and I found the easiest way for me to write songs was on an acoustic guitar.”

From there, the young artist began venturing out into the nightlife, performing whenever and wherever people would listen. “I did what everyone does: started out playing in bars, things like that,” she tells me. “I used to live in the countryside and then I moved down to Glasgow, where it’s a completely different scene – there’s so much more going on, there’s so many more opportunities. Being in that environment inspired me, and the people I met during my teenage years inspired me. That’s how I turned out to be who I am now I guess.”

Speaking to various bands and artists in the scene, you begin to develop a picture of a scene that extends beyond a handful of musicians that happen to be operating in the same city, beyond even a ‘community’ in generic terms. Whenever the subject of Glasgow comes up, the singer is effusive. “The music scene in Glasgow is just like one huge family. It’s a really small city, so it’s kind of hard not to know each other; it’s hard not to be in each others’ space all the time, which is a good thing.”

Sure enough, the band eventually came together as an organic process. For so many of this generation of bands, it’s taken as read that musicians will move around different live acts until something new begins to take shape. “I guess just through doing gigs, meeting people… Hamish, Ally, and Chris were all in different Glasgow bands, all combined now into one. We’ve known each other for a few years now, and been building on it ever since. We’re all best mates, too,” she admits with a smile. “We have the best time ever.”

That kinship began paying dividends quickly. Before they’d even released 2017’s Best Boy EP, LUCIA had racked up support slots with Maximo Park and, wonderfully, The Bay City Rollers at Barrowlands. “I think every band or artist in Glasgow wants to play there at some point in their career, so I was really lucky I got to do that so early on. It’s a huge venue, you know?” And the Rollers themselves? “Oh, lovely people. It was a surreal experience, but they were very supportive.”

Times have changed from the era when moving to London – to be closer to the watching eyes of the NME, Melody Maker, Select – was deemed a progression that most bands were expected to consider. If that’s an outdated notion in the age of streaming and a proliferation of trusted blogs, it seems that hasn’t stopped people asking the question. “I want to stay based in Glasgow for as long as I can,” Fairfull tells me, the shade beginning to creep across our table now. “I love it there. A lot of people say to you when you’re up and coming, ‘You’ve got to move to London’. No you fucking don’t! If someone’s really that interested in you, they will come and see you. There’s plenty of opportunities to see bands like us today.”

In the meantime, LUCIA are getting on with their position as one of the UK’s brightest young bands just fine. A debut album is still on the horizon, Fairfull tells me, though another EP could be in the works. Will that acoustic guitar get dusted off again? “Who knows what the future could hold? Maybe years down the line, I could want to do something totally different to what we’re doing now. But at the moment, this definitely feels right. I wouldn’t change a thing.”