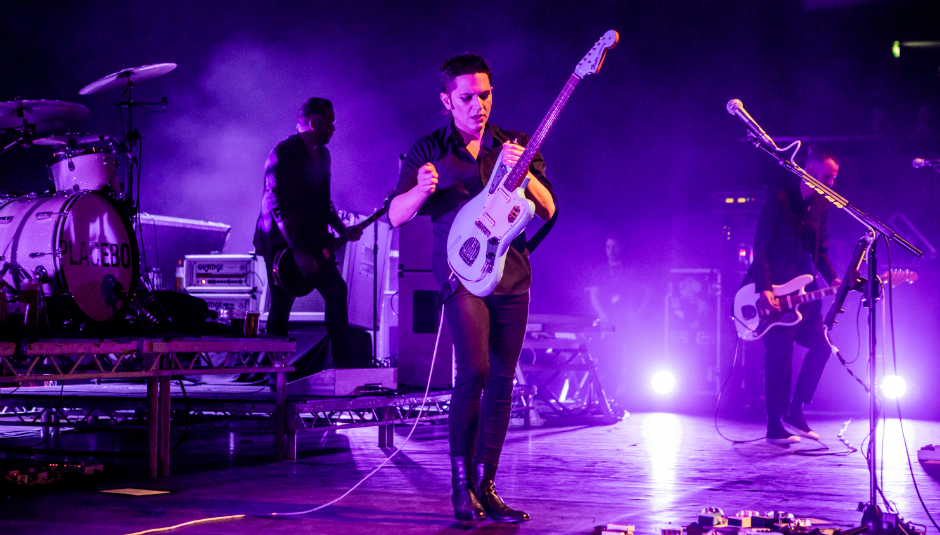 Support act Kaelan Mikla are three tiny girls from Iceland. They take to the stage hung in tulle and lace, the three witches from Macbeth about to stir up trouble. A fusion of performance art and doom-synth, singer Laufey Soffia summons forth high-scream battle cries that flicker between Poly Styrene punk and Diamanda Gallas shrieks. It brings us an occult set that’s a refreshing take on any genre of contemporaries you might find in their music. Robert Smith, who they thank with girlish giggles twice, has chosen well. Kaelan Mikla kick against their music scene the same way that Placebo did in 1996; and they don’t get the big finish the deserve – the Royal Festival Hall kick them off at 8pm sharp.

A Buddhist chant fills the stage.

The anticipation tastes like bubble-gum on ice. Gives you brain freeze.

From the start it’s clear we are at Glam Church. The audience are up on their feet to worship their arch-angels. Three chords of ‘Pure Morning’ ring out, my skin puckers up, everyone rushes to the front. My romantic heart rides on those bars, the locks I’d put around my memory rust, fall apart. I am full of dopamine, of oxytocin, of the glory of my younger days – and fuck it, I break into dance with the best of them. This moment is pure perfection. A friend in need’s a friend, indeed. Thanks Brian.

Placebo play for two hours. They play 20 songs, which includes two encores. To accomplish this, they never talk to the crowd between numbers. No time, I guess. Stripped back black skinny jeans on them both, minimal makeup. Guess what? The Placebo you thought were all about image never needed an image at all. Surprise, they’re still heartthrobs. They’re still icons for a certain generation. I’d missed those discordant harmonies. I’d missed that scratchy string noise. My rose-tinted lenses are off, yet – I still feel the same way as I used to about the music. Turns out it does all translate. What was in my head is on the stage in front of me. Fuck yeah.

Small spatters of “I love you!” are common, along with, mid-‘I Know’, the loudest Beetle Mania-esque cheer I’ve ever heard. This renders Placebo gobsmacked for a few minutes. I wonder, is this a micro-climate? Is there a place for the 2000s glam in today’s music?

At the finish, it’s like being fucked and left. You want conversation. You want love. Yet, you’ll never transfer your adoration to real-humanity. The audience will still answer Placebo’s 1am drunk-texts anyway – so we scream for more – and we get two encores, which audaciously include a cover of The Cure’s ‘Let’s Go To Bed’. Did you expect anything less?

For me, there’s two types of musical heroes. The ones who die young, and the ones who’ll make music till they die. Placebo are the latter, and these are the kind of gigs that convince old-bands to write new material. Velvet Goldmine’s Children of the Revolution are still here, and they’d like their glitter-smeared era revived – Mista BBC. With a feather boa on top.

"I thought someone would have kicked ...