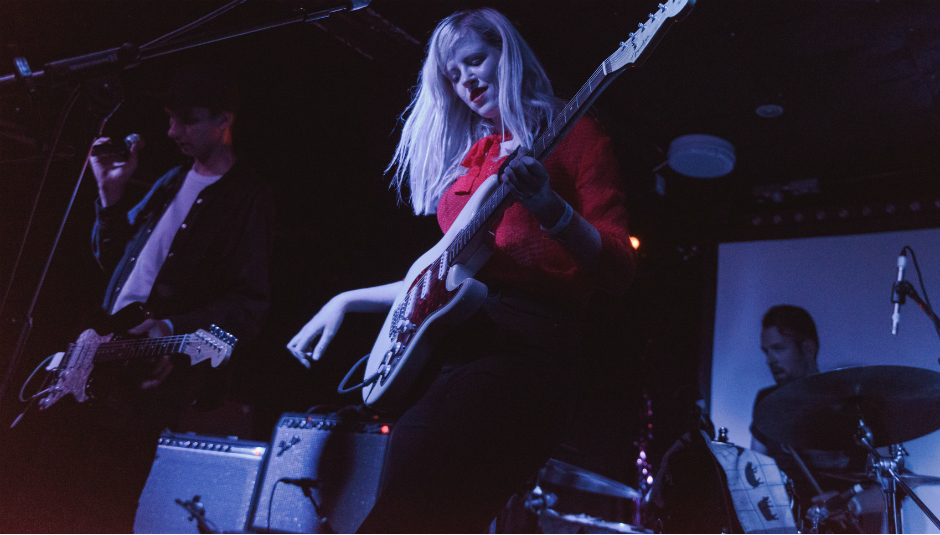 Visions 2017 kicked off literally with a bang as thunder roared outside as the first bands of the day took to the stage. Now in its fifth year the festival has consecutively brought the shiniest new bands, big name headliners, and an array of non-music fascinations so expectations for the Hackney all-dayer are headily high.

Deep in the bowels of Mangle in London Fields The Men’s sonic fug seems naturally at home in the basement’s darkened surrounds. Aptly cloaked in red light the Brooklyn band power through tracks from their latest album, Devil Music, a record where the distortion pedal seems set permanently to 11. Album opener ‘Dreamer’ elicits a few head bobs from the afternoon crowd with its driving urgency, whilst the wailed sax and major chords of ‘‘Hit The Ground’ invokes Steve Mackay and the Ashetons in their Funhouse sans Iggy.

Over at NT’s the scene couldn’t be more different as singer-songwriter Holly Macave is framed in bright light and the now blue skies billowing in from the floor to ceiling windows in the cosy top floor venue. Accompanied only by her guitar this should be a special intimate show, but the close proximity of the crowds jostling at the rammed bar and the whir of an overly-exuberant toilet fan frustratingly rob us of that moment.

Macave’s voice is so rich and velvety she could sing the menu from Mitty and Bobs, a burger bar also crammed into the venue, and it would still sound heavenly but instead, Macave plays tracks from her debut album, Golden Eagle. The paired back set up makes the macabre sentiment of ‘The Corner Of My Mind’ more tender and country longings of ‘Heartbreak Blues’ make you wish the train tracks outside the window led to Nashville rather than Enfield.

Shame take to the stage with singer Charlie bearing a look of intent that reads in no uncertain terms, “you’re all mine”. They shoot through the defiant new wave of ‘‘Concrete’ followed by the spoken word swaggered disaffection of debut single ‘The Lick’ and the instant sing-a-long “I like you better when you’re not around” chorus of ‘Tasteless’. The band play the straight guys to Charlie’s unbridled showmanship as he juggles his mike hand-to-hand like a prize fighter and gets up close to the growing crowd; he only falls flat, literally, when he takes a misjudge crowd dive and ends up kissing concrete. Closing with ‘Gold Hole’ Shame’s reputation as one of best live bands in the UK is upheld with ease and a Visions’ moment is made.

Grabbing risotto balls in the Street Food Market in Space Studios it’s back to Mangle where queues are snaking down the road for Blanck Mass. If there was a competition for the ‘Set Mostly To Give You Tinnitus’ the gold medal would be swinging round Blanck Mass aka Benjamin John Power’s neck as his set is LOUD. Tendering to his decks with understated precision Power unleashes the tracks from his latest album World Eater on the packed crowd; the apocalyptic nature of the machine gun beats on tracks like ‘Rhegus Negative’ played out in the confines of the low ceiling basement make it a cheek clenchingly intense experience.

Dum dum da dum, Angus Young is staring out beneath a bridal veil as Liars open their headline set with the haunting drone of ‘Drums Get A Glimpse’. The off-kilter beats of ‘Coin In My Caged Fist’ taken from latest album TFCF kick in and Angus, in the glare of the strobing lights, throws his top off to reveal a full wedding gown and looks more like a ghostly apparition than a blushing bride. The show is a Liars’ career spanning ‘greatest hits’ set; ‘Scarecrows On A Killer Slant’ has Angus moving side-to-side like possessed human pendulum, there’s a crowd surfer for fan favourite ‘Mr Your On Fire Mr‘ and a mosh pit haemorrhages for ‘Plaster Cast Of Everything’ with Angus arms cast out overhead. It’s the first UK show for Liars since 2014 and it’s a wondrous reminder of how much Liars, down to just Angus as the sole member, have created and mutated. Closing with ‘Broken Witch” tonight Liars have shown they’re back and more vital than ever and Visions Festival has once again limboed under the bar it set so high with ease.

EMA's Track By Track Guide to Exile I...