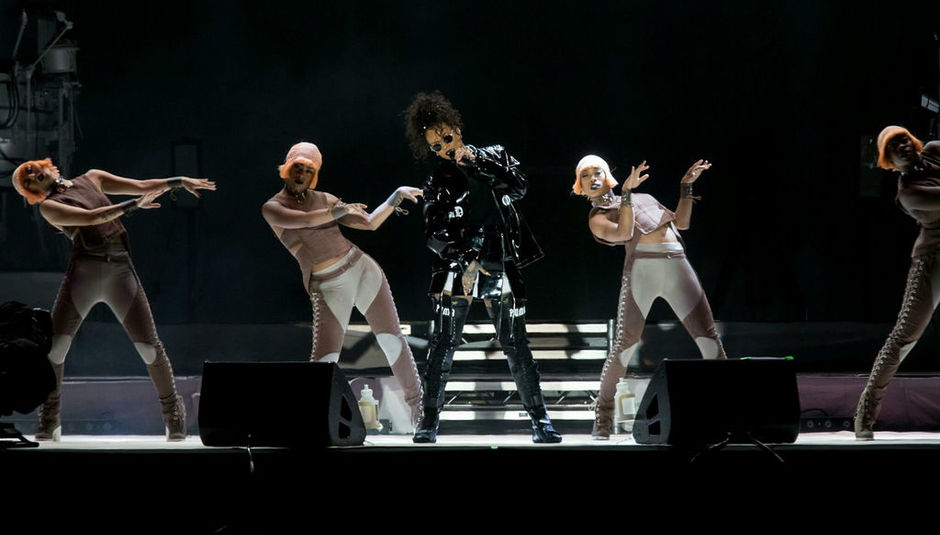 We have ruined V Festival for ourselves. You and I and the ageing process, and all the money we’ve spent on boutique festivals and unique camping experiences in beautiful places. Places where the trees are adorned with weatherproof origami and the mac’n’cheese is made by Annie Mae. The mac’n’cheese at V Festival is not made by Annie Mae. The site has not been artfully decorated. There are not enough toilets. The after-hours options are little more than to make bad decisions near your tent or to make bad decisions far away from your tent.

Basically, if you don’t want to go on waltzers or get fingered behind waltzers or be in the general proximity of waltzers then V Festival will make you hate yourself and everyone around you. It is Lord of the Flies with NOS canisters and Native American headdresses because the memo about cultural appropriation has not yet reached Essex. I roll my eyes and grumble passive aggressively at the crowd’s selfishness as they barge me out of the way once, twice, 23 times a set, looking through me as if I am not even there.

This happens so much I start to wonder if I am even there. Am I alive? Maybe I died in my tent without noticing and only my soul is watching Justin Bieber huff his way through his set. This theory becomes more convincing as I stand there, annoyed that Bieber can’t be bothered to perform properly: V Festival headline slots are millennial purgatory and that’s why we can’t enjoy Bieber’s show and why Rihanna will not be much more than OK tomorrow. We are all dead and passing the time before judgement. Bieber is also dead. He’s disappointing us on purpose, contractually obligated to be boring and bored because fun is not allowed in purgatory. He can’t sing because he’s dead. He can’t keep up with his dancers because he is dead. He has to tediously comment on each and every food outlet he can see from the stage because he is dead and can no longer know the joy of imbibing food. When (if) his set finally ends, we will be called up to heaven or cast down to hell to the strains of Sorry - is it too late now to say it? yes - and at least then we will know.

It turns out that I do exist and Bieber is just hungover and we, the crowd, are all bored because it is boring to watch a man not give a shit about his work or the fact that people have come to see him, actual him and not just a cardboard cutout of him pulling his trousers up while a CD plays. People stream away from the main stage, leaving clusters of dedicated girls holding out till the end in case it gets amazing. It does not.

The girls here are frequently incredible. Their outfits are pristine, hair french-braided to perfection. They’ve spent a fiver having glitter applied to their faces and it looks amazing, shimmering as their phone cameras flash. When one of them motions for a group selfie, they all know exactly where and how to stand, what to do with their faces, how to veto a shot. They are looking after each other in that overly dramatic way that teenage girls do, and have excellent taste in pop music.

I’m glad for those girls that Little Mix are on the bill. Representing all the women, salute, salute, the UK’s best pop band sing before destroying all that good hashtag feminism by covering a song by alleged sexual abuser and paedophile R Kelly. They also cover two Beyoncé songs and 'Hotline Bling' which is baffling because they are Little Mix. They have maybe not a mountain but a good hill’s worth of excellent songs of their own and there’s room for more of them in their set. I will take DNA over the misogynistic overtones of 'Hotline Bling' any day of the week. I wonder whether the overall message of the otherwise enjoyable set is empowering or damaging to the glittery girls and I cannot decide.

The glittery girls do not seem to care, to be fair to them. They care even less about All Saints, who play to a crowd of women of a certain age who are reliving their youths just as the band are. It is 1.15pm when Shaz and Mel and Nic and the other one insist that they still know where it’s at and two twenty-something bros huff balloons, their cheeks slowly crisping in the afternoon sun. A man is filming a woman who may or may not be his significant other as she dances alone. Occasionally he turns his camera, for some reason capturing the back of the crowd where we are also bobbing along, mouthing words we never forgot. What is he going to do with that crappy video footage, I wonder. It’s a shame the glittery girls do not care about All Saints because they are excellent in the way that bands who didn’t think they’d ever be on stage again always are. They know what we want - hits, classics, no new stuff - and they happily oblige.

We turn up to Rick Astley’s stage just as he starts 'Never Gonna Give You Up'. It’s a magical moment, we are thrilled with our timing. His voice sounds great and he seems genuinely happy to be there despite the fact that we have all obviously come to see this one 20-year-old-song that is now a meme. We are so filled with joy by this experience that we turn away from the stage and semi-telepathically agree to buy matching t-shirts. They are not Rick Astley t-shirts, to be fair, but still. Rick should get a cut for our euphoria-induced purchasing decisions.

With all apologies to Rick, Sia is the easy stand-out of the weekend. She facelessly presides over her stage, all wig and dress, as a series of theatrics take place before her. Baffling, obscure theatrics involving phones and desks and panes of glass, projections that don’t work and Hollywood A-listers who may or may not actually be there, we can’t tell. It’s a bold and beautiful set. Every shot that makes it to the big screens looks like something from a music video and her voice, strong and low with just the right amount of rasp, sells 'Diamonds' better than Rihanna does. It’s not exactly wasted on the V Festival crowd, as they raise their faces to the grey sky and belt out 'Cheap Thrills' and 'Chandelier', but it might be better experienced with a better view and fewer dickheads around.

Of course Rihanna comes out half an hour late. Of course it’s raining while we wait. Of course we all get that thrill running through us when she starts singing and of course you grin and clasp your hands together and think 'She is literally the coolest person alive'. Rihanna is always somehow better and worse than you think she is going to be. She heavily favours the songs from Anti, of which she is obviously proud, but by halfway through the set my attention has wandered and I’m thinking about checking train times and dreaming wistfully of London. The kids out on My First Festival Experiences are still throwing up and passing out and pissing everywhere I look. I am no longer open to new experiences or willing to queue for a drink. A couple is having a blazing row in front of me. Someone is on someone from TOWIE’s shoulders on my left, a drunk girl trips and breaks her ankle on my right. I’m tired of all this. I want to leave this weird and in many ways much worse world, it is too full of young, selfish people and reminds me that I was once young and selfish just like them. Youth. Much like V Festival, I never ever want to go through that again.